Ask choreographer Saar Harari what Princess Crocodile is about and he doesn’t want to tell you. On the phone from his home in Brooklyn, the soft-spoken, Israeli-born dance creator evades the question, until finally he shares:

“The piece isn’t about just one thing, one point. There are many [elements] in the picture. If I talk about this, it might influence people to think about only one thing that it’s about. We’re trying to allow for a lot of possibilities, for people to put themselves into the piece and to connect to something, to see something.”

Harari is one half of the artistic partnership (Lee Sher is the other half) that formed LeeSaar-The Company, the now New York-based dance group that inaugurates American Dance Institute’s Israeli contemporary dance series. A decade after the artistic and life partners immigrated to New York from Tel Aviv, they have earned a name and some press accolades for their unique brand of highly physical and expressive movement. With this performance, ADI initiates a presenting program that will bring one Israeli contemporary dance offering to its Rockville studio/theater each season for the foreseeable future.

“Our Israeli Contemporary Dance program allows ADI the unique opportunity to engage with members of our immediate community while simultaneously strengthening our mission of presenting innovative work that challenges our audience and the art form itself,” said Adrienne Willis, executive director.

The evening-length Princess Crocodile, a world premiere, comes on the heels of the seven-woman company’s debut at the prestigious Joyce Theater in Manhattan earlier this month. There, and here at ADI this Saturday and Sunday, the women will marinate their movement with unbridled, quirky investigations into what the body can accomplish, fine-tuning their physical capabilities with emotive subtexts that can be read in multiple ways.

Harari and Sher, an actress and director, are adherents to the famed and much-in-vogue movement process called Gaga. Invented by Israeli-born former Martha Graham dancer Ohad Naharin, now best known as the long-time house choreographer and director of the Jewish state’s most prominent dance troupe, Batsheva Dance Company, the movement language is a fluid and evolving process of introducing new ideas and sensations to the moving body in an investigative studio process where the dancers take cues and move off into physical tangents of their own.

Harari explains: “Gaga is a movement language that teaches you a lot about what you already know but forgot. It gives you the tools to connect to a lot of power, sensitivities and abilities and it gives you a frame of listening to your body.” Today at Batsheva’s studios in Tel Aviv’s Neve Tzedek neighborhood and around the world, Gaga classes are available for both professional dancers and everyday people, because, Harari adds: “It’s a really strong language to learn, not just as a dancer but as a person. … It makes you better, no matter what you do. [You stimulate] the connection between your brain and your body, your body’s abilities, your sensitivities, your awareness, your sense of learning.”

Harari, who as executive producer of Gaga/USA oversees the Gaga education programs and master classes at studios and colleges around the country, grew up in the dance studio. Raised on Moshav Herut, an agricultural village between Netanya and Tel Aviv, he studied throughout his childhood — his mother directed a dance studio on the moshav — until joining the Israeli army at 18, as is required of all young Israeli men and women.

He studied modern, ballet, contemporary and jazz dance at his mother’s studio, while he also put in his time in the fields helping his father, a farmer, with the avocados, oranges, tomatoes, potatoes and watermelon in the summer. At 18, he left the family farm and dance studio to serve and spent six years in the army, three in special forces. Returning to dance at 24, he began to explore the burgeoning dance scene in Tel Aviv, where he met Lee Sher, a rising actress, who grew up in Netanya and began working as a child performer on Israeli television before building a full-time professional career. The two fell in love and eventually LeeSaar-The Company was created.

The decision to decamp to New York a decade ago wasn’t taken lightly. “We left for many different reasons,” he says. “One of them was to get away. I think everyone [in Israel] needs to get away at one point in their life, to take the time to see what interests you, to take time to invest in your choice. It’s harder [to do your creative work] when you’re in the place where you were born and you’re surrounded by people that you know for a very long time.”

“Today we’re immigrants,” he continues, “and we’re like all immigrants. We’re 10 years now in New York. We talk about what we did and what we left behind [and] why don’t we go back [to Israel] every day.” But New York affords them with new opportunities, new challenges and a company of dedicated dancers culled from around the world. Now with two children, ages 5 and 9 months, they’re more dedicated than ever to making their company and their careers work in New York.

Rehearsals take place at Congregation Beth Elohim in Brooklyn’s Park Slope neighborhood. “It’s our home for the company for the last four years, and it’s very important for us,” Harari says. “We don’t just rehearse there; the rabbi and the director, we like to see them and they like to see us. They help us in any way they can. They’re supporting us in many ways. They’re really good people.”

The concept of home, and being away from one’s homeland, one’s people, one’s extended family, has come up a few times in this brief conversation. This puts Harari in a contemplative mood momentarily: “We are far away from the people we love and appreciate, but we came here to make work so we are always about focusing on making work, more and more work in order to get better. We do it for the love of it.” 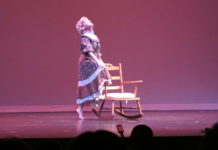 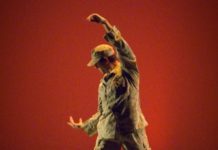 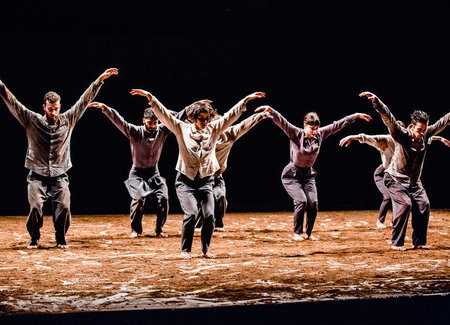 An earthy dance into the human psyche