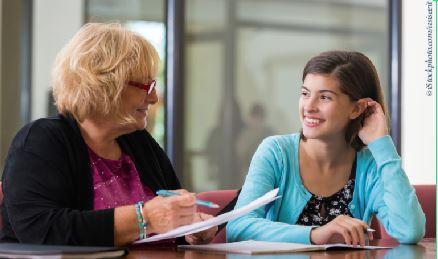 This month, juniors at the Charles E. Smith Jewish Day School in Rockville are sitting down with their counselor to discuss the college-application process. These one-on-one meetings can last up to two hours, and from them comes a list of colleges the student can consider applying to.

But The New York Times recently reported that students nationally may not be receiving the help they need because counselors’ time is stretched too thin. There is, on average, one counselor to almost 500 students. “The federal Education Department’s Office for Civil Rights said this year that one in five high schools in the country had no school counselor at all,” the Times reported.

In Indiana, “counselors are pulled in too many directions to devote adequate energy to college and career guidance,” according to a study reported in Edweek. “The amount of time counselors spend on non-counseling duties (hall monitor or administering tests) has more than doubled in recent years – from 18 percent in 2010 to 40 percent in 2013. That means time for college and career counseling has dropped from 32 percent to 21 percent in the same time frame.”

The numbers are better in the Washington area, according to the American School Counselor Association, which recommends a student-counselor ratio of 250-1.

Wootton High School’s 550 seniors are served by nine guidance counselors, a ratio of 61 to 1, said Lynda Hitchcock, the Rockville public school’s college/career information coordinator. Unlike many school districts, Montgomery County has a dedicated professional like Hitchcock at each high school to guide students through the college-admissions process.

At area Jewish day schools, students receive extensive one-on-one counseling. “I have a relationship with my students and their parents,” said Michelle Jacobs, college counselor for the Melvin J. Berman Hebrew Academy, in Rockville.

Berman Academy has one guidance counselor for its 200 students, plus Jacobs, who has worked as a college admissions officer.

She meets formally with each student three times during their junior and senior years. But she ends up meeting informally with them “dozens of times,” as they work their way through the application process.

That process includes an online tool called Naviance, which holds college transcripts, has a parents survey and resume builder, and information about colleges, such as majors they offer and their application deadlines. It’s favored by Washington-area high schools.

“We love it,” said Dawn Allison, career-center specialist at McLean High School in McLean, which has a 250-to-1 student-counselor ratio. Every Fairfax County high school has a career/college specialist like Allison.

Like college counselors in Montgomery County public schools and at area Jewish day schools, Allison’s work includes running college application workshops, reading college essays and “help[ing] students and their families decide what schools might be a good fit for them.”

She offers a support group for parents of seniors “where they can ask questions and see that they aren’t alone in the process.”

The college-preparation process starts during freshman year at Yeshiva of Greater Washington in Silver Spring, according to Rabbi Scott Hillman, enrollment and communications manager. “We also produce publications for the parents and students which include timelines and advisory choices for their high school careers to help them in their decision-making processes for post-high school education.”

Yeshiva just held a financial-aid workshop, which featured a representative from Yeshiva University in New York.

At Wootton, college preparation begins in earnest in December of a student’s junior year. Hitchcock meets with the juniors, as a class and individually. In February, students meet with their individual counselors to make sure the classes they’re taking “are aligned with their college goals,” Hitchcock said.

In March, students in groups of four or five meet with their counselors to learn what the college application process is.

At about the same time, students at CES/JDS are learning the fundamentals of developing a college essay.

“We sit one-on-one and talk through their ideas,” Rexford said. “The essay is the piece that adds that personalization. If they’re interested in the topic, their sincerity and true voice come through.”

Rexford remembered one girl who wrote her essay about gutting and cleaning a chicken. “It was part of a life-changing experience. An essay can either pop or not pop a student in the college’s eyes,” she said.

Summers are time to work on those essays. Wootton offers a “college class” – three hours a day for five days of guidance working on college applications, essays and resumes.

In the fall, the new Wootton seniors can attend after-school workshops on financial aid, scholarships and the in-person interview. The last weekend of September is “College Weekend,” when no homework is assigned.

Instead, seniors can receive individual help on their essays or attend workshops if they weren’t able to after school.

Counselors say that they provide the human connection between the high school and the college. If a student is on the edge of being accepted, for example, “I can write a bit of additional information that might not have been clear in my letter of recommendation,” Jacobs said. “There are colleges that are open to that conversation.”

Students also change between junior and senior year, so Jacobs will sometimes update her letter. “I might see something in a student that isn’t apparent in the application, or fill in what’s gone on in senior year.”

That year is almost up at CES/JDS. The last day of school is Jan. 23, and many seniors will go on a class trip to Israel. Rexford said her job isn’t finished, though.

“We’ll be letting them know we are available for them when they’re in Israel.”