At the twilight of his career, Bob Dylan couldn’t be blamed for allowing himself to fall into the nostalgia trap. It would be so easy for the 73-year-old to make a living off his early hits — and no doubt thousands of adoring fans young and old alike would pack concert venues as they did on Tuesday night of last week at DAR Constitution Hall to cheer on the living legend.

But here is the thing about Dylan: He refuses to become like the monuments of the nation’s capital, instead pushing boundaries as an artist and moving into unchartered territory.

Robert Allen Zimmerman has come a long way from his humble roots as a Jewish boy growing up in the rural iron ore mining town of Hibbing, Minn., and he is showing no signs of slowing down.

That progression was on display during his 19-song set list that featured only four 1960s and 70s-era tunes – “She Belongs to Me” (Bringing It All Back Home, 1965),” Tangled Up in Blue” and “Simple Twist of Fate” (Blood on the Tracks, 1975), along with perhaps Dylan’s most famous anthem “Blowin’ in the Wind” (The Freewheelin’ Bob Dylan, 1963). The rest of the set list was mostly taken from later albums, including 2006’s Modern Times, 2009’s Together Through Life and 2012’s Tempest.

Dressed in white, Dylan and his backing band started promptly at 8 p.m. as people were still finding their seats. It wouldn’t be a Dylan concert without some kind of a carnival atmosphere, and that was provided by an elderly hippie and his dog who looked like they took a wrong turn on the way to Woodstock.

Dylan now prefers the personal to the political and his gravelly, world-weary voice croons of hard times, love lost and found again, regret, redemption and the passing of time. While his lyrics can be somber, there is the sense that Dylan is enjoying himself on the stage and appreciating every standing ovation.

The acoustics at Constitution Hall were just right, not too loud and not too soft, whether Dylan was standing at the mic, sitting at the piano or playing the harmonica.

Dylan’s final song came as something of a surprise, a sentimental cover of Frank Sinatra’s “Stay With Me.” Indeed, the audience could have stayed with Dylan all night. And it appeared the feeling was mutual. 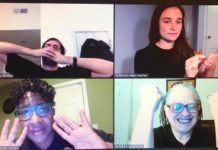 Playback theater group hands stage over to Jews of color 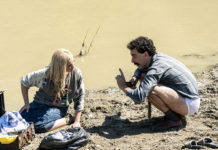