Julie Zetlin knows something about Olympic competition. The rhythmic gymnast and Bethesda native, who competed in the 2012 Olympics in London, staged a homecoming of sorts last week when she stopped by Capital Rhythmics, at the Darnestown gym where she trained for many years.

“Being here obviously brings back so much nostalgia of the training, and the sessions, and the pain, and happiness,” said Zetlin, 26, who now lives in Los Angeles. Retired now from the sport, she recently was inducted in 2016 class of the USA Gymnastics Hall of Fame.

She pointed to a banner in the rafters which read, “Home of Julie Zetlin, 2012 Olympian.” “It’s endearing to see it,” said Zetlin, peering at the banner. “I prepared for the Olympics in this gym, so a lot of memories are coming back.”

Nearby, seven young athletes worked on their balance, with an occasional pirouette and leap.

“My mom got me into the sport,” said Zetlin. Once a gymnast herself, Zsuzsi Zetlin founded a rhythmic team and enrolled her daughter at age 4. “I loved it because I loved to dance,” Zetlin said.

At the age of 9, she connected with Olga Kutuzova, a Russian-born trainer who continues as the owner of Capital Rhythmics.

“I took private lessons, six days a week, on average 4 hours a day,” said Zetlin. “Olga saw the future in me. My parents saw my desire, and they saw my dedication, and my passion, but they never in their wildest dreams saw that I’d be an Olympian. Olga knew there was something there. She’s calm and stoic.

“Usually coaches are brutal, and she’s not,” she said.

“You definitely need to be mature to compete,” said Kutuzova. “People are watching you, and you must perform your exercise. I didn’t look at Julie or any of my girls as a potential Olympian. You don’t think in that way, at least in the beginning. Rhythmic is so close to ballet. And in America, ballet is so big.”

During her teen years, Zetlin experienced success in various world championships. She placed second all-around at the 2005 Junior U.S. National Championships in Indiana, and won various junior titles in the years that followed.

As a result of her successes in the sport, Zetlin was chosen to compete in the 2012 Olympics in London.

“I was happy to be selected [for] the Olympics. This is a tough sport. Lots of work and not a lot of play,” she said. However, Zetlin faced setbacks, and she placed 21st in the qualifying rounds and did not advance into the finals. 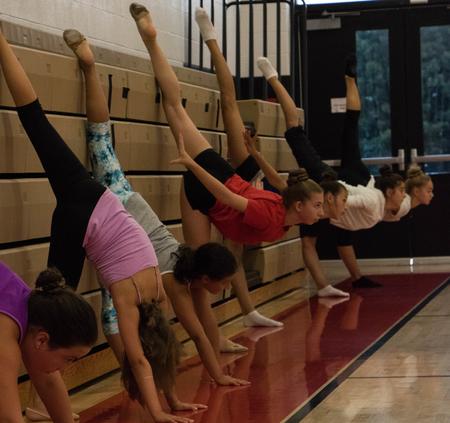 Mia Shparaga, 17, who trains at Capital Rhythmics, has long seen Zetlin as a role model.

“[I] watched Julie a few times when she went off to the championships. Julie’s always been my inspiration and my role model,” said Mia, who doesn’t harbor Olympic dreams, but does want to emulate Zetlin’s sense of dedication to the sport.

“It’s always been a learning experience, watching her training with Olga. I always wanted to have the relationship [with Kutuzova that Zetlin had],” said Mia. “I started when I was 6, when Julie was training. I learned rhythmic gymnastics, and haven’t done any other sports.”

Zetlin, who is studying at the American Jewish University in Los Angeles, said that it is difficult to forecast whether a competitor will become a professional athlete.

“You don’t know who is going to come and leave, and just don’t know what’s going to happen,” she said. “You can’t make a forecast until the girl is a little more mature. You don’t know how long the girls will stay in the sport, and the rules get harder.”