The former cultural attaché of Israel, Sarit Arbell, has a life and busy schedule dedicated to Israeli artists.

Since leaving the position in early October that she held for five years at the Israeli Embassy, Arbell founded Israel on Stage, a nonprofit organization dedicated to creating “a platform for Israeli artists to showcase their talents and bring their voices to a wide new audience.”

Arbell says the effort stemmed from her desire to represent Israeli artists at the Association of Performing Arts Presenters, an annual global performing arts conference and marketplace held in
New York.

With more than 1,000 showcases packed into one weekend, producers and artistic directors have a lot of talent to choose from. “It’s really unbelievable. It’s crazy,” Arbell says. “It’s so huge.”

She says that “when I worked at the embassy, Israel never had a booth there.” But after seeing the convention for herself, she decided this had to change.

She pushed to organize a booth representing Israeli artists, and for 2011 and 2012, her wish was granted. But she says after that, the foreign ministry decided against it, so they went without representation for two years.

She clarifies that it’s not that artists from Israel weren’t represented at the convention, but more so that they weren’t identified by their nationality.

“Just across from me in the booth, when we had a booth, there was a Canadian agent and he was presenting all kinds of artists. And one of them was a very known Israeli mimic performer, and he had body-sized stickers on the floor, and our tickets [keys] to the rooms were with his picture, and nobody knew he was Israeli,” Arbell says.

“So I said, you have tons of Israelis who are being represented by agents, but nobody knows that they’re Israeli! So for me, it’s like a lost fortune.”

To help streamline and publicize that information, Arbell created a catalog of Israeli performing artists. She says the American Israel Cultural Foundation provided her with the names of 600 Israeli scholars. From there, she and her group compiled the information into a booklet that is organized by Dance & Theater, Classical Music, General Music, and Jazz & World Music, the largest section and “one of Israel’s biggest strengths,” Arbell says.

She says the book is a work in progress, but could be a useful resource for venues seeking Israeli artists or talented performers, regardless of their nationality.

“If we don’t make it in a concentrated way under one roof of Israeli booth, then people are not aware of it,” she says. “Plus, we have all these other talents that are smaller and did not find an international presenter yet, and we can help them by exposing them.”

The next step is creating a board and continuing to build her new venture.

Admittedly, she says, jumping in with both feet might not have been the “right way” to kick-start Israel On Stage, but it was the “Israeli way.”

After she left the embassy, “I just said, there is APAP in three months…APAP needs to happen, whatever it takes,” she says.

She was there in January showcasing Israeli talent through an Israel On Stage booth, her newly-compiled brochure on hand featuring hundreds of names of Israeli performing artists.

Looking ahead, Arbell hopes to have Israeli representation at every important performing arts convention. In 2016, she wants to plan a showcase of Israeli artists during APAP.

“Very often, as a presenter, you have to choose between going to a jazz showcase here or a jazz showcase there, and in both showcases there are Israeli artists,” she says. “So at the end of the day there are Israeli artists who are competing against each other, which is not good….They are all brilliant, and they all deserve an opportunity, so my goal is to make it more organized.”

“For example, let’s say an Israeli artist has a performance on a certain day and they have another performance scheduled, but in between they have four nights that are open,” she says. An organized website could help fill those gaps. “There is so much mutual interest, because, first of all, they are very often ready to perform for a lesser price and…nobody knows about these windows of opportunities.”

Arbell says she’s not interested in getting involved on the business end of things. “When I was the cultural attaché at the embassy, I described my work as a matchmaker,” she says. “I bring the bride and the groom, and if they fall in love, you know, they find a way to do it.”

That, she says, is basically the idea behind Israel On Stage, “to be a matchmaker for Israeli artists with local venues.” 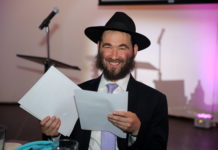