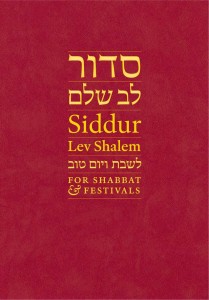 At Congregation Beth Emeth, they’re waiting for the prayer books to arrive.

The Conservative movement has just published its first new siddur, or prayer book for Shabbat and weekdays, since 1985, and the rabbi and ritual committee of the Herndon congregation want to take it for a test drive.

Siddur Lev Shalem, or the Complete Heart, was published this month by the Rabbinical Assembly. In it, the movement attempts to make the prayers more accessible to those with little Jewish background or Hebrew skills, more inclusive of women and LGBTQ congregants, and a richer experience for those whose Jewish knowledge is deep.

At a list price of $49, or $29.40 for movement affiliates, outfitting an entire congregation in prayer books is more than an impulse buy. Beth Emeth ordered three copies to start, said Rabbi Mina Goldsmith.

“We’ll look at it for ease of use,” she said. “Are the translations accurate yet meaningful? Is the transliteration more accessible? Do the commentaries add to the experience? Is the page distracting? Is it such an improvement that it will be worth investing thousands of dollars?”

The siddur, like the High Holiday machzor that the movement previously published, is arranged in four columns. The Hebrew text faces the transliteration. Running down the outer margins are commentaries including historical context, readings and poems. The prayer book begins with a section on preparing for Shabbat at home.

Siddur Lev Shalem “has been expressly designed to meet people where they are, whether at synagogue or at home, religiously or spiritually,” said Rabbi Julie Schonfeld, executive vice president of the Rabbinical Assembly, in a statement.

Like Goldsmith, Rabbi Ethan Seidel of Tifereth Israel Congregation in Washington has a few copies on order. He also wonders also if it will be “different enough and better enough to invest in.”

The congregation would need 300-400 copies at a cost of more than $10,000, he said. That wouldn’t be an impossible sum — those stickers inside the book with a donor’s name is a time-tested incentive. But Seidel said that he and his ritual committee, which will consider the new siddur, are happy with the old one, called Siddur Sim Shalom (Maker of Peace).

Lev Shalem reaches back into history for some of its innovations, according to Feld. The ancient blessing for moments of good fortune has gone out of use, except during grace after meals. “We have revived its more general use” during the Torah service, he wrote in an email.

At the same time, the shift in the meaning of words has led to some being dropped: out went “awesome God,” replaced by “awe-inspiring” God.

While other synagogues wait for the package to arrive in the mail, Agudas Achim Congregation in Alexandria has already received 100 test copies and put them through their paces at a Friday night service.

“The preliminary reactions were positive,” said Rabbi Steven Rein. “We enjoyed the commentary provided in the margins, and the transliterations. The liturgy hasn’t changed, but the way we translate liturgy has changed.

“The siddur will enable more in my community to engage in prayer,” he added, sounding like a man who’s made up his mind to buy the car. “It’s recognizing that there are many portals to prayer and Jewish spirituality.”

The world is moving so quickly that even the best prayer book may have only a 20-year lifespan, Goldsmith said. As she waits for her sample copies to arrive, she’s already thinking about what will replace it.

The Book of Ruth | by Nathan Lewin