The old South and the new collide in the haunting and disconcertingly timely musical “Parade,” in a taut and spare production by Washington’s Keegan Theatre.

The work, an early musical by Broadway wunderkind composer Jason Robert Brown, retells the gut- wrenching tale of Leo Frank, the only Jew lynched in America. The ignominious event occurred in 1915 and fed on an unfortunate love of sordid news, yellow journalism and hatred of Jews that feels pulled from today’s Twitter feed.

Running at the newly renovated Church Street Theatre near Dupont Circle through April 15, “Parade” unfurls in the shadow of the Civil War, when Confederate flags still flew, wounded Confederate soldiers still walked, and memories of battles were still salient.

Directors Christina A. Coakley and Susan Marie Rhea have taken a large, sometimes overly done show and stripped it down to its essentials: a story forthrightly told by book writer Alfred Uhry, whom theater lovers and moviegoers may be familiar with for his play “Driving Miss Daisy,” another Southern epic drawn from the writer’s experience (Uhry’s uncle owned the pencil factory where Frank worked); and Brown’s lush and emotionally driven score with its nod to Southern musical influences, from roots country music, to blues and gospel.

On the bare stage with the building’s exposed brick visible, set designer Matthew Keenan places an abstracted tree fashioned from 2 x 4s at the center, an ominous reminder of what’s to come, but also a subtle suggestion of the rootedness of the folk that populate this town in the old red hills of Georgia.

Frank, a New York transplant who married into the family business, oversees a pencil factory where most of the workers are teenage girls — transplants from rural farming communities. His wife, Lucille, is a Jewish Southern belle, which both mystifies and occasionally rankles him. The play opens on Confederate Memorial Day, 1913, a holiday observed by the townsfolk with remembrances of their lost war heroes.

We meet pretty Mary Phagan (Cassie Cope) and Frankie Epps (Ricky Drummond), who’s sweet on her. Their innocent duet belies what’s to come. She stops in the factory to collect her paycheck and that becomes the last time she is seen alive. Frank, confronted at home by police, quickly becomes a suspect. Whether it’s his acerbic manner or his outsider status that condemns him, he is soon jailed and on trial for the rape and murder of a 13-year-old white girl.

As Frank, Michael Innocenti has the unenviable task of humanizing this less-than-perfect character: he’s impatient, driven and brusque, simply a fish out of water who exhibits few of the niceties expected in the slower paced Southern milieu where politesse hides ugly undertones.

Wife Lucille, played by Eleanor Todd, has taken to ameliorating her husband’s abrasive side. And though he expects to be found innocent, Leo ends up jailed, facing the death penalty for rape and murder. Everyone in town has turned against him.

Leo and Lucille’s relationship is revealed through Brown’s score: the counterpoint duet “Leo at Work/What Am I Waiting for?” contrasts the couple’s personalities and Lucille’s attendant waiting for her husband to return home to her, while her husband expresses discontent with his life in this Southern limbo.

Among a terrific ensemble, the standouts musically include Patrick M. Doneghy as night watchman and escaped convict Newt Lee, who sings a bone-chilling blues number on a chain gang. Harrison Smith as Britt Craig, the over-imbibing reporter, makes this production even more prescient with our current appetite for fake news as he grabs onto the most sordid aspects of this event. Innocenti, as Leo, sings about his outsider identity, “How Can I Call this Home?” and Todd, as Lucille, who shows her strength and determination with “Do It Alone,” soars with her strong and emotive soprano voice.

Interestingly, one of the threads that becomes more evident in this smaller version of “Parade,” is the point of view and relationships of working-class blacks. Uhry and Brown make it a point to demonstrate that blacks remain suspect and second- class servants in this white-dominated society.

“Parade,” which received Tony Awards for Uhry’s book and Brown’s score when it premiered on Broadway in 1998, is frighteningly relevant today with the rise of open anti-Semitism throughout America.

At a moment when bomb threats at Jewish community centers have become commonplace and anti-immigrant, -black and -Muslim statements are put forth by our government leaders, “Parade” is chillingly instructive of what can result from hatred. It is a must-see, alas, for those who most likely will ignore this artistic rendering of our nation’s bitter history of prejudice. 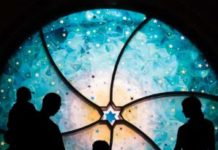 The holiness of a pastrami sandwich