With Chanukah beginning at sunset on Dec. 10, you can hand out presents that are mass produced and foreign made.

But in your neighborhood or at your synagogue there may be an artist who is producing hand-made, often one-of-a-kind items. We spoke with four local artisans, who told the stories behind their crafts, and offered a little philosophy on the side. 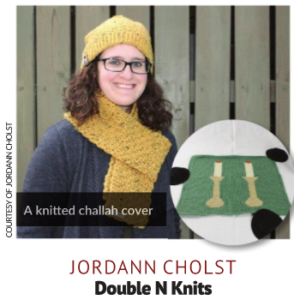 A few years ago, Jordann Cholst was faced with a dilemma. While her passion for knitting was limitless, available storage space was not.

“And you can only have so many blankets in your house,” the Rockville resident said.

So in 2016 she launched her Etsy shop, Double N Knits. The name refers to the two N’s in her first name. Cholst initially sold challah covers, a cloth used to cover the loaves for Shabbat meals. But the 31 year old has since expanded her wares to include tote bags, cup cozies and throw pillows.

Lately, Cholst has been making hats and scarves — she says they’re easier and faster to make than challah covers. Plus, with winter coming, they’re in demand.

Although Cholst, who’s a member of Temple Beth Ami in Rockville, comes from a family of knitters, she didn’t get into the craft until college.

“I just find it very, very relaxing,” Cholst said. “I like that it gives me something to do with my hands while I’m watching TV. It’s just stress relief for me, in all honesty, just sitting there and focusing on it.” 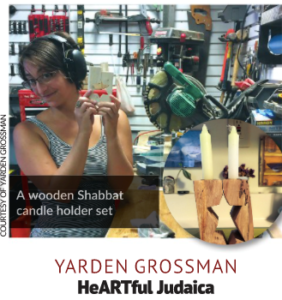 Yarden Grossman has a fascination with tree bark. She first expressed her love for the “beauty of a tree’s history and personality within its grain” through drawing and painting. But she has since moved on to working with wood itself. Under the name HeARTful Judaica, the 31 year old crafts and sells wooden menorot, mezuzah cases and Shabbat candlestick holders.

“Whenever I sell a piece, whether it’s Judaica or artwork, it’s like I’m giving them a part of myself,” the Fairfax resident said of her work. “And I think that’s what I really like about it. It’s like an insight into me, into the way I see.”

Grossman said she ventured into woodworking out of a frustration for what she saw as a lack of kosher menorahs — where the eight candles are all on the same level and the shamash candle is on a different level. Her desire is to produce Judaica that is both functional and contemporary.

“It’s not your bubby’s silver Judaica candle holders,” Grossman said. “It’s great to have that heirloom, but I also want people to take ownership of the rituals that they’re performing and have something that they themselves really love.”

A portion of every sale is donated to the Jewish Coalition Against Domestic Abuse. 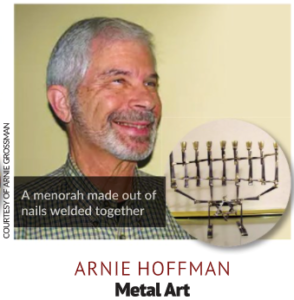 Arnie Hoffman was browsing through a craft show in the 1970s when he came across a stick figure welded out of metal.

So Hoffman got himself an arc welder and started creating art pieces. At first he gave them away as housewarming gifts. But eventually he began selling his works at craft shows and online.

Hoffman, 79, enjoys taking discarded items and transforming them into something new. Like the tree sculpture he fashioned out of washers, forks, bicycle chains and gears. But for the most part, he works with horseshoe-style nails. He uses them for his “Word Works,” where he welds nails into different phrases as decorative wall art. Hoffman also makes Judaica like dreidels and menorot.

Hoffman is a retired master electrician living in Silver Spring. He’s been a member of Temple Emanuel in Kensington since 1976 and is a past congregation president. Hoffman sees his hobby as a way to continue working with his hands. 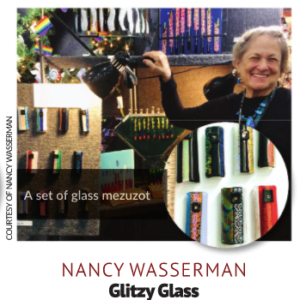 In college, Nancy Wasserman took a ceramics class that sparked a two-decade- long career in pottery. This eventually led to her running an art gallery in Ohio and teaching art to middle-schoolers in Hawaii, until she settled on her current passion, glasswork.

Under the name Glitzy Glass, Wasserman crafts and sells glass Judaica, like menorot and mezuzot, along with nail files, pendants, earrings and cufflinks. She says her Ruth Bader Ginsburg ornaments are quite popular.

“I like the immediacy [of glass]. When I was a potter, that was the reason, too. I really like putting something together as a finished piece,” Wasserman said. “I like shiny things. And I like things that make people smile and things that when people wear them, somebody always comes up and says, ‘Oh, that’s so pretty.’”

Wasserman, 72, attends Adas Israel Congregation in Washington. She moved to the District about a dozen years ago to live near her kids and grandkids.

A signature of her work is using lace to etch designs. It’s a reference to her grandmother, who did lacemaking as a hobby.

“And I take her lace to honor her,” Wasserman said. “Because I feel that it’s important to carry on heritage. I think that everything needs to have a reason for existing. And that’s the way that I can give to the next person some vital part of my spirit.”