Rabbis Daria and Josh Jacobs-Velde will be the new joint spiritual leaders of Oseh Shalom, a Reconstructionist congregation in Laurel.

The couple is coming off of a three-year stint in California where they led an unstructured, creative Jewish community call Zmanim, which aimed to connect Judaism to nature and spirituality. Before that, they shared the pulpit at an unaffiliated synagogue in Ohio.

Both rabbis were ordained in the Reconstructionist movement, although this is their first time leading a Reconstructionist-affiliated congregation. They were ready to get back into a more traditional Jewish setting, but also saw in Oseh Shalom a community attracted to some of their more innovative and creative practices, said Daria Jacobs-Velde, 44. They’re seeking , she said, to “deepen what’s already going on here.”

For example, said her husband, when the couple visited earlier this summer during the interview process, they took the congregants outside before saying Havdalah, the prayer at the end of Shabbat, to relish in the good weather and appreciate nature for a moment.

“We’re hoping to bring some of the interest and focus of connecting Judaism to the natural world to this congregation and community,” he said.

She added that their focus now is to learn more about the congregation to see how they can help improve people’s Jewish lives.
The congregation is composed of about 240 families.

“One of the things we’re really looking forward to doing now is getting to know people and building those relationships,” she said.

The benefit of being joint leaders, they said, is the ways in which they balance each other. Neither is going to get burned out from doing all the rabbinical duties all the time. Want to start up a Mussar class on Jewish ethics? Rabbi Daria. Want to discuss Jewish Renewal while out on a hike? Rabbi Josh.

“We’ve enjoyed doing the co-rabbi-ing thing,” said Josh. “We have a shared approach to Judaism, but we also have different and complementary interests and skills in Judaism 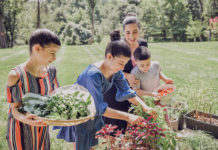 Bloggers and artists get creative for the High Holidays 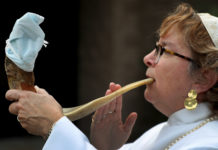 Looking for an online Rosh Hashanah or Yom Kippur service? Here are some options, based on your interests.