Twenty high school students protested in front of the Israeli embassy on Jan. 31, demanding the release of a teenage Palestinian in an Israeli prison.

Ahed Tamimi was arrested in December by the Israel Defense Forces and charged with assault after she slapped two Israeli officers on her family’s property in the West Bank village of Nabi Saleh. She turned 17 on Jan. 31.

The protest was organized by the anti-occupation group IfNotNow. The high school student protesting in Washington, and at similar events in New York City and Boston, were the group’s youngest demonstrators, said spokesman Ethan Miller.

At the gates of the embassy, participants left birthday cards and balloons with messages such as “we are standing with you in solidarity.”

Ahed has confronted IDF soldiers. In 2012, as a 12-year-old, she was photographed raising a clenched fist and staring down an Israeli soldier. In 2015, a video showed her biting and hitting a soldier who had grabbed her brother.

The video of her December confrontation went viral. Israeli Defense Minister Avigdor Lieberman said that Ahed, her mother and her cousin, who were also arrested, “will not escape from what they deserve,” and that “whoever goes wild during the day, will be arrested at night.” Education Minister Naftali Bennett said Ahed deserves a life sentence.

Supporters see her as a symbol of resistance to the Israeli occupation.

Ilan said he has grown up celebrating Israel and its culture, but has become more sensitive to the lack of privileges Palestinians live with compared to Israelis and Americans.

“When I think about the life that I live compared to the life that [Ahed] lives, that really affects me,” said Ilan, an officer of the USY Conservative youth movement. “I go to a private Jewish day school. We are encouraged to pursue our beliefs and fight for justice, go to college, get a good education, support Israel. People in the Palestinian territories do not have those same freedoms that I have.”

Ilan was joined at the protest by several high school juniors from outside the Washington area who are spending a semester at the School for Ethics and Global Leadership, a program for students who are interested in foreign affairs and leadership development.

Ariela Rosenzweig, a 16-year-old from Boston, said the program includes a unit on the Israeli-Palestinian conflict and she sympathizes with Ahed’s case.

“I am [Ahed’s] age, I’ve never had to face anything like that,” she said, adding she wishes more American Jewish organizations would speak out on the Palestinian’s behalf.

“I’d like to send a message that young Jewish people are the moral voice of our community,” she said. “We are standing up against the occupation and we hope our community will stand with us.”

Haaretz reported that 438 Palestinians under 18 were in Israeli prisons for security-related offenses as of February 2016. Human rights groups accuse Israeli authorities of torture as well as denying the minors due process by not allowing them to be with a parent or attorney.

In an email, embassy spokesperson Itai Bardov criticized the demonstrators for being one-sided.

“This so-called demonstration was a small group of no more than 15 people who gathered for about 40 minutes and left. Hopefully, they will also find the time to express their discontent with the incitement within the Palestinian Authority that encourages violence against Israelis. This incitement is what led Tamimi to physically attack two Israeli officers, who exercised restraint and did not respond to the assault,” Bardov wrote.

Laurie Kamens, marketing communications manager for United Synagogue of Conservative Judaism, wrote in an email, “USY does not have any policies on which groups USYers can participate in. Ilan Cohen did not attend this demonstration as a USYer or on behalf of USY.”

Some of the students said they saw Ahed’s case as a human struggle as opposed to a political one, including 17-year-old Olivia Marwell of San Francisco.

It’s really about standing in solidarity with other women who are willing to stand up for their rights and other people’s rights,” she said. “There’s a lot of work to be done.” 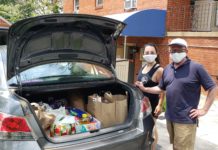 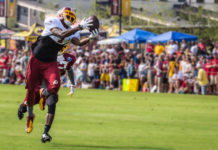 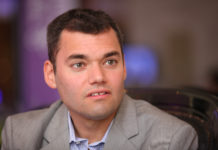 Peter Beinart was an outspoken advocate of the two-state solution. Now he’s abandoning it.