In the days immediately preceding Passover, the leaders of a pro-Israel organization traveled from Israel and Canada to Indiana to meet with more than 100 community members in three towns in what was labeled a “Rolling Educational Conference” with the title, “Spreading Zionism Where It Matters,” in part to help these communities prepare to celebrate Yom Ha’atzmaut, Israel’s Independence Day.

Herut North America, a 20-year organization that affiliated with the American Zionist Movement in 2002, has concentrated recently on working with Jews in smaller communities, especially in, but not limited to, the Midwest, to teach about Zionism and help with educational initiatives designed to strengthen these various communities’ ties with Israel.

This was the largest scale series of public events Herut sponsored in the United States so far in 2018 and was preceded by the group’s relaunch in London in February and by Herut Canada’s membership drive and other activities.

Since its inception, Herut has worked with all Jews regardless of affiliation, and provides volunteer internships for students and adults in Israel to observe and experience the Israeli job market and society, as well as individualized assistance in the aliyah and absorption process. Zionist education is a main thrust of Herut’s efforts.

Jade Levitt, Herut Canada’s chairwoman, and I were in Indiana for three days and personally led many of the programs alongside Indiana residents who are leaders and active members of Herut.

Starting March 22 in Anderson, Ind., more than 50 attendees were offered workshops on Zionist history, Judaism and Hebrew. A Gary, Ind., event with 35 participants primarily focused on understanding the importance of Jewish unity; Zionist history was taught there as well.

The third event was in Kokomo and had 30 participants on March 24, and included a special session led by Herut Canada’s Jade Levitt on marketing, public relations and communications aimed at providing local Herut groups in the Midwest with the tips and tools they need to both expand their groups as well as help other groups successfully launch in other communities.

Herut traces its history back to 1999, when Knesset members Benny Begin and Michael Kleiner left the Likud political party organization. Subsequently I and other Jabotinsky movement veterans started World Herut and its youth movement, Magshimey Herut. Herut sees itself as the reborn Jabotinsky movement for Zionist education and pro-Israel activism.

The Jewish Unity Challenge calls on Jews of all backgrounds, denominations and ethnicities, emerging Jewish communities in Africa and elsewhere, as well as Ashkenazim and Sephardim, Anousim, Bnei Menashe and Bal Ej to join in bonds of unity in the spirit of ahavat yisrael (love of fellow Jews). Herut believes that by promoting solidarity we show our faith in the promise that in the future, all of the Jewish people will return to our historic homeland in eretz yisrael, the Land Of Israel.

Karma Feinstein-Cohen is the executive director of World Herut. 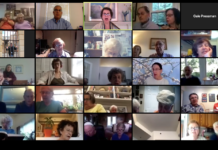 I’m an Israeli settler. American Jews are debating my future, but here’s what they don’t understand.