As the Festival of Lights approaches, you might fry latkes and make applesauce in your dreams. The food is delicious and everyone is content and full, and above all, the meal is mess and stress free.

Then reality sets in: You are seriously so busy this time of year.

While you may want to instill some tasty Jewish traditions in your family, do you really have time to shred a few bags of potatoes, or knead some finicky sufganiyot dough?

Thankfully, this is 2020 and not 1920. These days, our grocery store shelves are stocked with convenience foods, so use them to your advantage. If you know what to do, it’s super easy to make a delicious, “semi-homemade” Chanukah meal that will still create lasting memories.

Read on for our top Chanukah food hacks — they’re kind of like having your sufganiyot and eating them, too.

No Chanukah celebration is complete without latkes, but the prep work can be time consuming, tedious and possibly a bit dangerous (especially if you have little helpers in the kitchen). But here’s some good news: It’s possible to have tasty latkes and not bloody knuckles.

Refrigerated and bagged shredded potatoes make frying up latkes a snap. Just swap out fresh taters with the bagged alternative in whatever recipe you use, and most people won’t even taste the difference.

Yes, you could just buy some jarred applesauce. But does anyone with teeth (and taste buds) actually like the stuff? If you have an Instant Pot — or any pressure cooker — you can make homemade applesauce in a flash.

Just toss eight peeled, cored and chopped apples into the pressure cooker with 1 cup of water, juice from ½ a lemon and cinnamon to taste. After the lid is secure and the mixture is cooked on high pressure for 8 minutes, mash up your apples to the consistency you desire.

Use pre-packaged biscuit dough for the easiest sufganiyot ever.

Kids generally love making treats like sufganiyot in the kitchen with their family. But when you’re having guests over, or if you’re generally not the type who enjoys baking, there’s a hack for that: Use refrigerated biscuit dough — the kind that comes in a tube.

Simply break apart the pre-portioned dough and fry the biscuits in heated oil until golden on both sides. Amazingly, you don’t even have to cut circles. The biscuits come pre-sliced. How perfect is that?

If you have a pastry bag in your kitchen, fill it with your favorite jarred jelly and push the tip into the middle of the donut. Squeeze the jelly into the donut until it is filled with enough sweetness to make your dentist cringe.

If you don’t have a pastry bag, you have a couple of options: You can cut your donuts in half and put some jelly in the middle of the pastry, like a sandwich, or simply serve jelly as an accompaniment to the fried biscuit for dipping. Pro tip: Not sweet enough for you? You can also sprinkle some sugar and cinnamon on top of the warm donut to add a little more oomph if you wish.

How exactly do you cook a brisket dinner for a crowd while also fulfilling all of your daily (as well as holiday-specific) obligations? By using a slow cooker. This ultimate set it and forget it tool allows you to cook, slow and low, tough cuts of meat like brisket without any worries about overcooking.

Even better, about 10 minutes of effort will reward you with a super-tasty result. Just toss a brisket (fat side up) in a slow cooker with some cans of broth, sliced onions, carrots, garlic and spices. Cook the dish on the high setting of the cooker for about 6 hours, or until tender.

Serve your brisket with latkes and a salad and your dinner is complete.

Fancy up store-bought hummus for an effortless appetizer.

First things first: You can absolutely take a package of store-bought hummus, serve it in its original packaging with some store-bought crackers and that’s that. But why not add some color and flavor to an otherwise standard app?

Take your container of ho-hum hummus and spread it onto a shallow bowl. Scoop a small space into the middle of the hummus, and top the dip with extra virgin olive oil, fresh rosemary leaves, crushed pistachios and pomegranate arils. If you have the time or inclination, you can include some roasted, diced butternut squash as a topping for some extra color. The decorative additions will hide the fact that you didn’t make the hummus from scratch.

Pro tip: Think beyond pita. Try serving the hummus with fresh veggies or pretzels. Anything dippable will do. 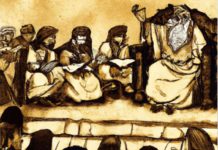