Here are five of the marks they made.

Morton Luchs offered a chicken with every house

Before North Bethesda was a network of bustling roads and shopping centers, it was home to a 94-acre farm at what is today the intersection of Old Georgetown Road and Tuckerman Lane. Real estate developer Morton Luchs, wanting to make a name for himself, bought the farm in 1934 and established Luxmanor. Luxmanor was a series of “farmettes” that middle-class residents could purchase for less than $10,000 (which would be about $185,000 in 2017). Residents could own a small home and a piece of land large enough to raise crops and animals, but still work a full-time job in town.

“These were half-acre lots that featured stocked chicken houses and vegetable gardens and appealed to Depression-era residents that were interested in some self-sufficiency after the horror of the stock market crash,” Kelly said.

In 1922, none of the 11 country clubs in Montgomery County allowed Jews to be members. Morton Luchs was the president of the Town and Country Club, comprising German Jews that began meeting in Washington in 1913.

Luchs negotiated the purchase of the summer home of the physician Armistead Peter on Woodmont Avenue in what is now downtown Bethesda. The old Peter house became the Town and Country Club, which later changed its name to the Woodmont Club.

“Establishing the Town and Country Club in Bethesda was a bold move and something of a toehold for the Jewish community,” Kelly said.

Until the 1940s, Kelly said, the club was the “center for Jewish social life in Bethesda.” Many Jewish developers were members of the club, including Luchs and Morris Cafritz.

In 1936, Russian immigrant Abraham Kay bought the Indian Spring Country Club the intersection of University Boulevard and Colesville Road. Kay built 300 houses on the site, and the country club became a center for the Jewish community in the 1940s and ‘50s, Kelly said. 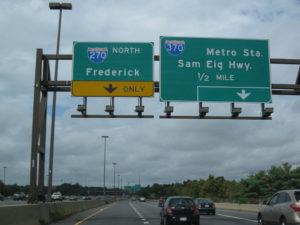 Jewish developers were good for Jews, but bad for blacks

This was done, she explained, because the Federal Housing Administration had codified the practice of restrictive covenants in the 1930s. As a result, the government considered “racially homogenous” neighborhoods more financially stable, giving developers an incentive to exclude blacks.

By the 1950s, Montgomery County had become D.C.’s Jewish suburb

By 1956, 11 percent of the county population south of Rockville was Jewish and represented one-third of Greater Washington’s Jewish population. In that year, there were five Conservative, one Reform and one Orthodox synagogue. Today the total number of synagogues in the county has grown to 42.

Kelly’s talk, on July 13 at the Davis Library in Bethesda, was sponsored by the Jewish Historical Society of Greater Washington.