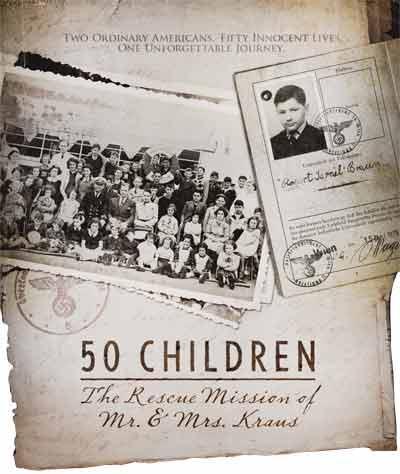 The Joseph and Rebecca Meyerhoff Theater at the United States Holocaust Memorial Museum (USHMM) was packed on Thursday of last week for the Washington, D.C., premiere of 50 Children: The Rescue Mission of Mr. & Mrs. Kraus. An HBO documentary, the film is co-sponsored by the USHMM and had its worldwide premiere on HBO on April 8, Yom Hashoah.

Directed by San Francisco-based journalist Steve Pressman whose wife, Liz Perle is the Kraus’ granddaughter – the film is based on the manuscript of Eleanor Kraus and is narrated by Alan Alda with Mamie Gummer reading from the memoirs of Kraus that are now in the USHMM’s permanent collection.

The year was 1939 and Hitler and his Nazi regime had taken over Austria and incorporated it into the Third Reich the year before. With ominous news of potential deportations and genocide, many Jews attempted to flee their hometowns and were actually allowed to leave by the Germans at that time. The problem was that many places, including America, had strict immigration quotas and would not let them in.

Gilbert and Eleanor Kraus, a young Jewish couple from Philadelphia, had also been hearing the terrifying news of what was happening to their Jewish brothers and sisters in Europe. After much back-and-forth and resistance from leaders in their own Jewish community, they made the decision to travel to Nazi-controlled Vienna in the spring of 1939 to save a group of 50 children and bring them back to America with them. Accompanied by a doctor, the Krauses selected the group of 50 children, selflessly promising to care for them in place of their actual parents, many of whom perished in concentration camps. They were successful in their mission and returned by ship to Philadelphia with 50 children in tow.

Despite their heroic act, Perle and her cousins only knew of their grandparents’ story through their grandmother’s manuscript.

“They never talked about it,” said Perle. “When they returned, two of the children lived with them for a while, so we would talk about it only in terms of updates on them. It was more of a social thing. They didn’t tell us that they had done this great thing, they didn’t even discuss it.”

Pressman, who had heard of his wife’s family’s story for years, made the decision in the early part of 2010 to create the film and publicize the Kraus’ experience.

“Once I dug into the manuscript and really fully grasped the incredible nature of the story, it occurred to me to try to take this wonderful story and turn it into a documentary,” he said.

Upon completion, the film came into the hands of Sheila Nevins, president of HBO Documentary Films.

“Everyone at HBO really liked the film, and they decided to take it on,” said Pressman. “It has been such a thrill and honor to work with HBO, it doesn’t get any better than them when it comes to documentary films in this country.”

Pressman added that creating the film allowed those that were saved by the Krauses, three of whom were in the audience at the D.C. premiere, to learn more about their saviors, Gilbert and Eleanor, who passed away in 1975 and 1989, respectively.

“I believe that the film has been able to educate those that were saved about who the Krauses were,” he continued. “It was just wonderful for me, in the course of having them tell their stories, to be able to fill in some of the gaps that they themselves had about the circumstances of their own rescue from Vienna back in 1939.”

Perle, who was also in attendance at the premiere in the District with a large contingent of the Kraus family, explained that if her grandparents were alive today, they would be “proud and embarrassed” by the film. “I don’t think they ever wanted the spotlight shown on them, I think they just wanted to do the right thing,” she said.

“I’m hopeful that the film will somehow serve as an inspiration to people about what we all might be able to do in our lives, the small, quiet acts of heroism that we’re all capable of doing,” said Pressman. “Gilbert and Eleanor Kraus were in that category of unlikely heroes that rose above themselves to do something unimaginable and heroic. We all have the potential to do that. I hope that some people watching the film will feel inspired, while also celebrating the miracle of saving the lives of these 50 children.”