As Independence Day approaches, I invariably begin thinking about American rye whiskey, as necessary to the founding of the republic as life and liberty. As the late master distiller Dave Pickerell once put it to me: “When they threw the tea into Boston Harbor, it wasn’t just throwing tea, it was throwing the British way of life — and that included rum, the colonial drink. They certainly weren’t about to quit drinking, but it did mean they were going to switch to something made indigenously, and that was rye whiskey.”

Here are four rye whiskey cocktails to keep you cool in the heat and ensure that you remain a most dandy Yankee Doodle.

Rye and Ginger Ale
Originally a Prohibition-era concoction designed to mask the taste of the inferior grain whiskey mixed with rye, it turns out that ginger ale actually goes wonderfully with quality rye.

Directions
Pour the rye into a pre-chilled Collins glass, add the ice cubes, and top up with the ginger ale. Simple, delicious.

Gall Bracer
This is short, simple, tasty and bracing.

Directions
Pour the ingredients into a tumbler or rocks glass with ice.

If you’d like a more elegant presentation, mix the same ingredients in a cocktail shaker filled with hard cracked ice, stir or shake, and then strain into a pre-chilled martini or cocktail glass. Regardless of presentation, garnish — if you wish — with a maraschino cherry.

The Ward Eight
According to cocktail lore, barman Tom Hussion at the Locke-Ober Café in Boston created this drink in 1898 to
celebrate a local politician’s victorious bid for the Massachusetts General Court from Ward Eight.

Directions
Pour ingredients into a shaker filled with hard cracked ice. Shake well and either strain into a pre-chilled cocktail glass or, even better — although less traditional — strain into a pre-chilled Highball or Collins glass half-full of cracked ice, and top-up with club soda or seltzer.
The rye’s sharp tang marries wonderfully with the tart bite of the lemon, gently softened and rounded by the orange, while the grenadine’s sweetness helps throw the whole thing into perfect harmony.

The Blinker
The origins of this one are obscure, but the recipe first appears in Patrick Gavin Duffy’s 1934 bar guide, “The Official Mixer’s Manual.” It is said that the name comes from an old synonym for blinders,” the small leather patches that attach to a horse’s bridle at the side of his head, greatly limiting his peripheral vision. Not sure this drink has the same effect on humans.

Directions
Combine in a cocktail shaker filled with hard, cracked ice and shake well. Strain into a pre-chilled cocktail glass. Twist the zest over the drink to release its citrus oils, and then drop into it.
Alternative: A tweak from 2004’s
“Vintage Spirits and Forgotten Cocktails” by Ted “Dr. Cocktail” Haigh calls for 1 ounce of grapefruit juice instead of 3, and he substitutedraspberry syrup — the kind you drizzle on ice cream — for the grenadine, and uses only 1 teaspoon instead of 1 ounce.
Personally, I tend toward the classic, which I find smooth, a tad spicy and wonderfully
refreshing. L’chaim!

Send your wine and spirits questions to Joshua E. London at [email protected] 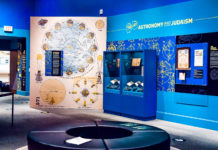 ‘Jews in Space’ exhibit lands at Jewish Museum of Maryland