We are in the midst of an election year and a tumultuous time for communal discourse.

Disagreements are now more likely to pull us apart than bring us together.
This was not always the case. Jewish tradition has long been made stronger by our ability to disagree with one another, and to honor and consider a diversity of perspectives no matter the topic. Indeed, a few of the most notable tragedies to befall the Jewish people in ancient times were those brought about by discord among Jews themselves.

Inspired by this observation, Rabbi Lord Jonathan Sacks posted an article called “Seven Principles for Maintaining Jewish Peoplehood” for becoming more compassionate listeners: Keep talking. Listen to one another. Work to
understand those with whom you disagree. Never seek victory. If you seek respect give respect. You can disagree, but still care. Remember that God chose us as a people.

Sacks’ Seven Principles are important reminders about how we can elevate care and comradery above distrust and division. In reading through his list,
however, I found myself wanting to add one more recommendation: to act on what we learn.

We — as Jews, neighbors, fellow citizens — must seek to understand and respect one another. But I believe it is not enough simply to listen and to learn. It is also essential that we act on the ideas and values we hold dear.

That means showing up to meetings where decisions are made. That means reaching out and partnering with other groups and faith communities on shared ventures. That means making donations and taking on volunteer leadership positions that speak to the progress we have in mind.

Our actions in the community and in the world may create more divisions — but that is where the rest of the principles come into play. So long as we seek to understand and respect one another, we can continue to move forward as a community and pursue important change.

After all, the role of the Jewish people throughout history has been anything but passive. As Dr. Donniel Hartman said, the Jewish people have had a disproportionate impact on the world because we have always stood for something.

Senseless hatred may no longer plague the Jewish people as it did in the past, but it is still a formidable factor in our midst. All of us have a responsibility to counter destructive forces and actively contribute to shaping our communities for the better. No matter who we are, we must each find our own way to make an impact.

We are a diverse and multifaceted people. While some of our differences may pose challenges, they do not have to hinder us. Our varying perspectives and opinions can be a source of strength, so long as we do not let the bonds between us fray. Like Sacks suggests, we have everything we need to come together to talk, to learn and, hopefully, to act.

Gil Preuss is CEO of The Jewish Federation of Greater Washington. 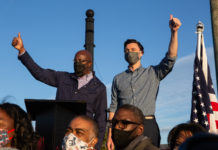