Is it possible to imagine greater validation of your celebrity than your name becoming part of the English language? That was the good fortune of Harry Houdini. An online dictionary defines Houdini as meaning “escape artist” as a noun and “to vanish or escape a difficult situation quickly” as a verb.

As author Adam Begley portrays him, the great escape artist would have loved this immortality. But as Begley also notes, that is just the beginning of the story of his name.

The person who would become Houdini, Erik Weisz (he became Erich Weiss in America), was born in 1874 in Budapest, Hungary, coming to the United States with his parents and four siblings when he was 4.

The family moved to Wisconsin, where his father, “the Reverend Doctor Mayer Samuel Weiss,” served as rabbi for the Jewish community of Appleton before he was fired. (Weiss spoke no English and so the 15 Jewish families in that small town apparently preferred “a younger model, one capable of assimilation,” Begley writes.)

The younger Weiss decided that his path out of poverty was show business and drifted into magic. He was greatly influenced by the memoir of an early magician, Jean-Eugene Robert-Houdin, becoming “Houdini” and taking the “solidly American” name, Harry, to “counterbalance the exotic surname.” (Ironically, years later, Houdini would write a book, “The Unmasking of Robert-Houdin,” which committed “literary patricide.” The man whose memoirs had inspired the young Houdini “with a passion for magic … the man whose namesake he became — his ‘guide and hero’ he had once called him — was now deemed a charlatan, ‘a mere pretender,’ a ‘Prince of Pilferers.’ ”) 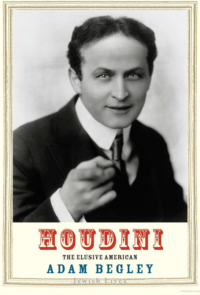 Houdini married Bess Rahner in 1894 and the couple took to the road, performing in small towns and barely surviving financially for five years. Finally, he was discovered by a theater owner who booked his act into “high-end vaudeville.”

Houdini continued his magic, but his new patron preferred his escape act and that’s what he honed and developed, eventually performing them all over the United States and Europe.

Beforehand, he would allow people, often police officers, to search his body to make sure there was no device to aid in his escape. Often initially skeptical, police officers usually showered him with praise after he emerged from a locked cell with his handcuffs and leg shackles unlocked.

Houdini kept making the escape scenario more difficult: first, it was from handcuffs and ankle manacles; then manacled from a jail cell; after that, it was from a container and then a container filled with water; then, from a river into which he had jumped in chains; then from a milk can; and finally, the Chinese Water Torture Cell.

Later in life, he made movies (as an actor, Begley writes, Houdini was a failure, “an amateur with meager talent”); became a leader of the anti-Spiritualist movement, which, using séances, sought to connect the living with the dead; and was a major collector of books and other materials connected to his four interests — magic, Spiritualism, Abraham Lincoln and drama and theater. (He bragged that his collection of magic books exceeded that of the combined collections of all the world’s libraries.)

While he was certainly an extremely talented escape artist and became very wealthy and famous from his profession, Houdini also was a difficult and strange person.

Although he apparently loved his wife, all his life she was clearly second in his affections to his mother. He once bought his mom a dress that had been made for Queen Victoria, and had her wear it to a party in Hungary. Houdini wrote about the party: “How my heart warmed to see the various friends and relatives kneel and pay homage to my mother, every inch a queen, as she sat enthroned in her heavily carved and gilded chair.”

In addition, Houdini “had a wild craving for publicity,” and a willingness to exaggerate or lie to promote himself. He once advertised his act as “one of the greatest magical feats since biblical times,” and again as one performed in London, before he had set foot in England. He called his father “a Talmudic scholar of note” and claimed he had a Ph.D. and LLD degrees, all assertions almost surely — probably wildly — untrue.

His aspirations knew no bounds. “Success never dimmed Harry’s ambition: it merely whetted his appetite,” the author writes. He always needed to overstate the “fabulousness” of his achievements, transforming “victories” into “epic conquests.”

As an amazingly self-centered man, bordering on being a narcissist, Houdini was an interesting character. But we would only be drawn to him because of his famous escapes. However, as the author notes: “Magic is ephemeral, and daredevil stunts like jailbreaks, bridge jumps and suspended straitjacket escapes even more so. We can read about them in contemporary accounts, but it’s hard to get a sense of how thrilling they must have been to watch live.”

Therein lies the author’s challenge. Houdini had amazing abilities, but the problem with this book is that it certainly was much more interesting to see him almost miraculously emerge with his shackles unlocked after being handcuffed in a jail cell than to read about his exploits.

The author struggled with this problem, but I’m not sure how successfully.