NEW YORK — The COVID-19 pandemic facing this city will test our country’s most deeply cherished values: respect for multiculturalism and religious freedom on the one side and the state’s responsibility to promote the common good on the other. This inherent tension is quite literally an issue of life and death.

In New York City and elsewhere, hospitals are close to experiencing a shortage of personal protective equipment and ventilators, which will greatly tax the hospital system’s ability to provide care. To be clear, as of now the city’s hospitals have not run out of ventilators. Yet given the rise in the number of patients coming to the hospital each day, preparation is warranted.

As hospitals develop triage protocols to prepare themselves for the time when they will need to treat too many patients with not enough medical resources, rabbis and public religious figures are grappling with the halachic answers to those same questions. And the protocols that New York City hospitals will ultimately adopt are going to clash with the position held by most, if not all, Orthodox rabbinic authorities.

If two patients show up at the hospital at the same time in need of the only ventilator, both hospital guidelines and rabbis assert that physicians should use clinical judgment to determine which patient has a better chance of survival.

The problem arises once a patient is already put on a ventilator. Many hospitals look to the 2015 Ventilator Allocation Guidelines, written by the New York State Task Force on Life and the Law, to help them figure out how to ration ventilators.

In a crisis, hospitals continually assess patients to determine whether they should stay on a ventilator or should be removed so that someone else can have a chance to live. The 2015 guidelines recommend that after being placed on a ventilator, patients must be reassessed after 120 hours, and every 48 hours thereafter, to see if there has been an improvement in their overall health. If there hasn’t been, the patient should be removed from the ventilator so it can be given to another person with a better chance of survival.

The details of the guidelines’ recommendations would not apply in the case of COVID-19, since patients typically must be on ventilators for a week or two before they show signs of improvement. Therefore, any new guidelines that emerge will necessarily have longer timelines before recommending reassessment. But the overall idea of periodically seeing if a patient should continue on a ventilator or be removed for the sake of saving another person will be adopted in the new guidelines.

The normative Orthodox position in such a situation is far different: Once placed on a ventilator, a patient cannot be taken off unless the condition improves or the patient passes away — even if someone else with a higher chance of survival will be deprived of a ventilator as a result.

This position is grounded in the idea that “one life should not be pushed aside for another.” In the Mishneh Torah, Maimonides writes that in a situation where a group of Jewish people is being accosted by idolaters who threaten them by saying, “Give us one of you and we will kill him. If you don’t, we will kill all of you,” they should all be killed rather than hand over a Jewish life. In essence, halachically, it is better to allow many to die than to actively participate in killing a single person.

The majority of contemporary American Orthodox rabbis rely on the rulings of Rabbi Moshe Feinstein to provide practical guidance in the case of triage. When Feinstein was asked about triage in the early 1980s, he wrote (Igrot Moshe, Hoshen Mishpat 2:73-75) that if a patient is already being treated, even if physicians incorrectly judged his or her survivability and mistakenly allocated resources to his care, another person with higher chances of survival does not take precedence and resources should not be re-allocated.

Feinstein’s reasoning is as follows: There is no obligation for one patient to surrender his life for the sake of another. Therefore, when the patient was allocated medical resources, the resources in effect became the patient’s for as long as the individual maintained life. It is not the case that medical resources are given to the patient contingently by the hospital until the hospital decides to take them away for the sake of another person. Rather, the resources have been committed to the patient as long as they are keeping him alive, without contingency. This is the case even if the second person is in a life-threatening condition and could be saved if given the resources.

As you can see, the difference is clear — hospitals will re-evaluate and reallocate resources in hopes of maximizing the number of people they can save. The Orthodox position places a primary value on stopping any type of active killing. The religious mandate is to endeavor to save lives, not to think that we have ultimate power to decide who lives and who doesn’t.

As New York City hospitals have not yet reached capacity, this clash of values has stayed in the realm of the theoretical. However, we already are beginning to see how even the idea that hospitals will not follow Jewish law is causing great worry in the Jewish community.

Maimonides Medical Center, located in the heavily Jewish Borough Park section of Brooklyn, is following the concerns of the Orthodox community: The hospital has committed to intubate patients and work with local religious leaders to provide patients the care they need based on their religious beliefs for as long as they can. However, Gov. Andrew Cuomo has pushed to have all of the city’s hospitals work as one system, which will include a set of common guidelines when there may not be enough medical resources to go around.

If, God forbid, we get to a point where triage protocols must be followed, the state will choose the common good over respect for religious freedom. This calculation is embedded in the Western concept of liberty from the outset, as expressed by John Stuart Mill in his essay “On Liberty.”

“The only purpose for which power can be rightfully exercised over any member of a civilized community, against his will, is to prevent harm to others,” Mill wrote.

This would not even be the first case in New York in the past 12 months where public health trumped religious freedom. Last April, Mayor Bill de Blasio signed an executive order compelling residents to receive the MMR vaccine due to a measles outbreak.

Though this may not be the first case where the state is faced with choosing the common good over the rights of individuals, it certainly is the most devastating. It’s tragic not only because hospitals may not have enough resources to care for its patient population, but also because our country must push aside the values of tolerance and religious freedom for another set of priorities.

Ira Bedzow is the director of the Biomedical Ethics and Humanities Program at New York Medical College. 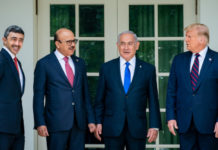