“It was like a ‘M*A*S*H’ field hospital,” Gary Singer says, describing his daughter, Dalia’s, bat mitzvah on March 28.

“We built our own ark in the basement. We built a lectern, and we used the chuppah cover from our wedding as the tablecloth on the bimah.”

Months ago when the family scheduled the coming of age ceremony, they expected to celebrate in the sanctuary of Congregation Etz Hayim in Arlington. Then, almost overnight, a standard simchah became out of reach, as synagogues and institutions shut their doors and people retreated into self-isolation.

Families like the Singers, and synagogues like Etz Hayim, had to improvise. Should they postpone until a better time? Or, like late night television, should they go on with the show, but without a studio audience? Rabbis interviewed for this story say they’re doing some of both. The bottom line, they say, is for the bar or bat mitzvah to still be an event to remember. In a good way.

While many families at Congregation Etz Hayim are electing to postpone their child’s bar or bat mitzvah, families were also given the option to borrow a Torah and prayer books in order to conduct a ceremony in their home. Dalia Singer and her family elected to take the congregation up on this offer. Her bat mitzvah was facilitated by the now-ubiquitous video conferencing platform Zoom.

The Singers say more than 100 families “attended” Dalia’s bat mitzvah, and during the service, people took videos of themselves celebrating in the comfort of their own homes.

“We have videos of people throwing candy at their laptops,” Singer says.

They say the service went extremely well, and they are happy they persevered despite the unfortunate circumstances.

“There is so much sadness in the world right now, and this was a bit of a ray of light for a lot of people,” Dalia’s mother, Jeannie Singer, says.

Dalia still plans to read from the Torah at Etz Hayim once the synagogue allows her to, in something the family has dubbed “Bat Mitzvah 2.0.”

Rabbi Lia Bass says that once Virginia allows people to congregate in groups of greater than 10, Etz Hayim will welcome the children to chant their original Torah portions on Saturday afternoons with friends and family in attendance.

Congregation Beth El of Montgomery County in Bethesda has also postponed bar and bat mitzvah ceremonies for the foreseeable future, but the large facility will allow the postponed services to take place apart from the regular Shabbat morning service.

Rabbi Greg Harris says families in his congregation are disappointed by the postponements, but that no one has objected.

“[The coronavirus situation] is completely out of our hands, so everyone has been really gracious,” Harris says.

At Adas Israel Congregation in the District, the clergy approached each bar and bat mitzvah family to see how the wanted to handle the situation, says Cantor Arianne Brown — reschedule, have the simchah on Zoom, or a hybrid of the two.

“Most families want to do something in person,” she says. “Most are choosing to reschedule.”

Faced with that possibility, the children worry, “Do I need to start all over again?” she says. “We don’t want to make them do that. Let’s let the children chant what they have prepared.”

For Daniel Malkin, like Dalia Singer, the bar mitzvah was going to go on. Sixteen days before his March 29 date at Tikvat Israel Congregation in Rockville, it was clear that things were not going to go according to plan.

“We quickly realized a normal bar mitzvah would not be feasible,” Joshua Malkin, Daniel’s father, told the Tikvat Israel Bulletin The family had expected about 40 out-of-town guests and planned to host a Kiddush luncheon at the synagogue and an evening event at the Twinbrook Community Center, according to the Bulletin.

On the Sunday after his scheduled date, Daniel stood in front of the camera in the family dining room and chanted his Torah portion in front of 60 synagogue members, “his grandmother in Japan and other relatives stranded by physical social distancing rules in San Diego, Atlanta, New York, New Jersey and Austin, Texas,” the Bulletin wrote. Rabbi Marc Israel and Cantor Rochelle Helzner led the service from their respective homes.

“Before logging off, congregants signaled their good wishes to Daniel with an outpouring of hand clapping symbols available on the Zoom screen,” the Bulletin wrote.

Congregation Etz Hayim’s Rabbi Bass said she knows many bar and bat mitzvah hopefuls are upset at the moment, but she encouraged them not to despair.

“Change is part of Judaism, and they are doing their part in the mitzvah of saving a soul. While that may seem like a nuisance right now, at one point in their lives, they will be able to say, ‘I had my bar or bat mitzvah during the pandemic,’” Bass says. “We all have tales to tell, and this will be theirs.” 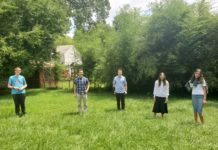 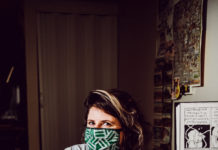