As a kid, Susan Sloan would take her makeshift detective kit — a magnifying glass, notepad, pencil and ruler, all packed in a tan Cabbage Patch Kids briefcase and stuffed in her bike basket — and ride around the neighborhood looking for mysteries to solve.

While Sloan, 34, now works as AJC Washington’s associate regional director and writes on the side, she maintains her detective spirit (and a cheap trench coat she pairs with dark sunglasses to look the part).

“As I got older, I realized that sense of discovery and curiosity has always been part of my mantra,” she says. “I’m not solving any mysteries, but I’m gathering stories, and they’re unfolding before me.”

It’s true of both her work at AJC — she talks with diplomats in Washington about the Jewish community — and of her latest passion project: writing a book.

It was always a bucket list item for Sloan, who had already knocked other feats off her ambitious list like reaching all seven continents by age 30 and getting a master’s degree while working full-time. But when she applied for the one-year book writing project, she had no idea what story she’d tell.

Inspiration struck at a gala honoring women leaders. Sloan was touched by the stories she heard that night and wondered who would share them.

She took the duty upon herself.

Sloan didn’t have an intricate outline when she started interviews with women diplomats, foreign ministers and government officials. But as she spoke with them, their stories crystallized into four themes — diplomacy, power, stability and balance — that coalesced into her eventual book, “A Seat at the Table: Women, Diplomacy, and Lessons for the World.”

The book is a testament to the remarkable women it features and to its writer.

“She comes to her work with a certain special touch,” said Alan Ronkin, director of AJC Washington. “By building thoughtful, trustworthy relationships with people around the world, Susan’s made a difference.”

Sloan’s ability to connect with others transcends the workplace — her friend and former colleague Rina Rebibo considers Sloan her “soul sister” despite a 15-plus year age gap.

“She can connect with different types of people, different ages,” said Rebibo. “There is no barrier when it comes to how she looks at somebody.”

Sloan brings a detective-like sense of curiosity and wonder to each conversation. “Everyone has a story,” she said. “If you sit and listen long enough, people will tell you just about anything. But also, if you’re open to what they share, you can really learn from them.”

Her outlook is evident in her book, which she deems a “treasure trove of information and experience.”

“I learned that the importance of having different voices at the table is really to create better solutions for the world and for our countries,” she said.

“Even looking at this pandemic, the countries that have women in leadership and diversity around the table coming up with solutions have had lower death rates and lower coronavirus spikes. And the data is there.”

The book, released April 6, scored glowing reviews on Amazon, and diplomats, friends and even moms of Sloan’s exes have bought it.

“I hope that even if one person reads it, it opens their mind to a different way of thinking,” said Sloan. “[If] they make a small change in their own life…then the book will have been worth it.”

Sloan sees her writing as a tool to affect positive change, something she views as a Jewish obligation.

“As Jews, we have a purpose for tikkun olam, repairing the world,” she said. “It’s imperative and incumbent upon us to change the world for good and be the light unto nations, and we can’t forsake that obligation…I hope we can continue to shine that light in the right direction.”

Sloan has big dreams for the future: a book tour, speaking at embassies and visiting more countries. For now, though, she’s in Atlanta recording her audiobook, expected to be released in the fall. She’s also publishing a 10-part Medium article series promoting her book as well as a piece about fighting racism.

“Everyone has one little step to do,” she said. “And if we all keep stepping, we’re gonna move in a direction. Hopefully, it’s forward.”

“A Seat at the Table: Women, Diplomacy, and Lessons for the World” is available on Amazon, Barnes & Noble, Rakuten Kobo and Ingram in Kindle and paperback. The playlist of songs that inspired the book, DiplomacyTable, is available on Spotify.

Purim in a world turned upside down 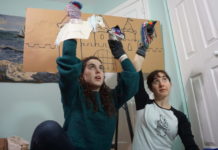 The puppet show must go on at Tikvat Israel 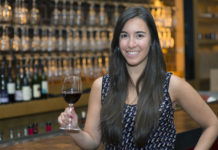 For the love of wine: Elyse Genderson