Some artists like to go small. Then there’s Rose Jaffe, 31. Since 2014, the Washington native has painted about 35 indoor and outdoor murals, the majority of which can be found around the District. There’s the mural honoring the late activist Mitch Snyder at Second and D Streets and a mural depicting Supreme Court Justice Ruth Bader Ginsburg at 15th and U Streets. Jaffe’s latest project is a mural of the Statue of Liberty at Hotel Zena on Thomas Circle.

What drew you to art?

I’ve been making art since I literally can remember. My mom is one of five sisters and four out of five of them are artists. My dad and his parents were from Philadelphia and they were big art collectors. I just grew up with a lot of art in my house and was kind of surrounded by art, and so I started at a young age and I really just fell in love with it.

How would you describe your style?

I really love portraits, people’s faces. I love telling people’s stories through drawing and painting. So it’s mostly portrait-based or people-based work. But you know, I’m a full-time working artist, and I think I can make that happen because I have such a variety of skills in the arts, from digital drawing to realistic painting, abstract painting, like I’ve done murals that look like a lot of different things.

How did you get into painting murals?

My first one outside was in 2014. And when I had my first solo exhibition, it was on the side of the gallery. And I really just fell in love with the process of working at that scale. And so I decided this was an awesome thing I wanted to do more. I loved the idea of working at that scale and being in the public and making art that was outside and accessible for everyone.

What are the pros and cons of mural painting?

I think the cons are that you’re working outside, often on brick or something that can be a difficult surface because it’s not super flat. So that can be a challenge. And, also, you’re in the elements outside, so you’re kind of at the whim of the weather, which would be challenging.

But I think there’s way more pros than cons. And I love the fact that public art kind of exists in this public space that anybody can see. And it’s accessible.

What do you hope people take away from your art?

I’m born and raised in D.C. and I’m dedicated to sticking around D.C. And to me, that means working to support and sustain the art scene and culture that’s already here. So I like to approach my murals as much as possible with the intention of highlighting, ideally, the culture or the people and stories of the nation’s capital in the way that they want to be told. I love highlighting unsung heroes of the people that might not be otherwise shown on a large outside space.

How do you see yourself as a Jewish person and how do you express that? 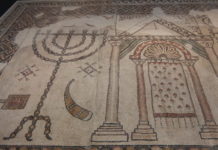