This was supposed to be the summer that Joseph Rubin got a job before heading off to college in the fall. Then the pandemic hit. So the 18-year-old District resident volunteered to distribute mezuzot instead.

Last month, Rubin began contacting local Jewish organizations and individuals to solicit for names and contact information of people who might be interested in a free mezuzah — the scroll-filled cases that Jews affix to their doorposts in keeping with the biblical commandment.

Rubin said he enjoyed the opportunity to interact with members of the Jewish business community. He also appreciated the excuse to call old friends to hook them up with a mezuzah.

“It’s just been a nice Jewish experience getting to express my Judaism and helping other people,” Rubin said.

This mezuzah outreach is an initiative of the Orthodox Union aimed at giving teens and young adults summertime volunteer opportunities. One of its partners is the Mayberg Foundation’s MyZuzah, which is working to put a mezuzah on the front of every Jewish house. (Foundation trustees Louis and Manette Mayberg are members of the ownership group of Mid-Atlantic Media, which publishes Washington Jewish Week.)

MyZuzah initially organized two groups, one in the Washington area and another in South Florida, to distribute mezuzot. A group in Dallas was added later.

“We thought that having a teen spend their valuable hours during the summer going out to communities, building relationships, connecting with folks local and far away and helping us identify people in need of mezuzahs would be a good use of their time,” said Alex Shapero, MyZuzah’s Washington-based program director.

In South Florida, volunteers did have face-to-face meetings. They did not in Washington, Shapero said.

Rubin was a member of his high school’s Jewish Culture Club, run by the Orthodox Union youth group NCSY. He got involved with MyZuzah teen fellowship after a rabbi from NCSY contacted him.

“I got involved with this program because I didn’t have much to do over the summer because of coronavirus. And it’s very easy to do the entire program safely from a virtual perspective,” Rubin said. “It’s been a really nice excuse to talk to people, and to wake up before like 10 o’clock.”

Hannah Schulsinger, 15, of Potomac is another volunteer. This summer she was supposed to attend a seven-week sleepaway camp in Pennsylvania. Like Rubin, she first heard about MyZuzah from a rabbi she knows from NCSY.

“I was like, sure. I’ve nothing else to do since we’re in quarantine. Why not?” Schulsinger said.

Schulsinger said it can be difficult to find people to contact, but posting on local Jewish Facebook groups has led to responses. The hardest part for her is whenever she gets a “no.” The best part is interacting with the other teen volunteers and learning new skills.

“I’ve learned a lot actually,” Schulsinger said. “I’ve learned how to talk ‘business-ey’ I guess. I’ve been learning how to email different organizations the hard way. I ended up not doing well the first few times like a few grammatical errors, but now I’ve been really good at emails, which is very good.”

Schulsinger said she’s enjoyed the weekly socially distanced lunches with the other local volunteers. So far, they’ve made arrangements to distribute at least 45 mezuzot. They’ll continue their efforts through this month.

“Having to do this all remotely has put a little bit of a crimp in their style,” Shapero said. “But they’re still doing great work and every mezuzah is another family, another house that we are connecting, protecting, uniting with the Jewish people.” 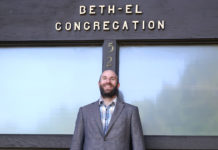