What do Black and Jewish members of Congress have to say to one another and how do they view relations between the two minorities? More than 300 households went online last week to watch three Virginia members of the Congressional Black-Jewish Caucus discuss how the Black and Jewish communities can work together to fight racism and anti-Semitism.

Elaine Luria, a Jewish Democrat representing Virginia’s 2nd District, was asked what a bipartisan group like the Black-Jewish Caucus can do in today’s highly politicized climate.

Luria said that, having grown up in Birmingham, Ala., civil rights had always been important to her. She said the recent killings of George Floyd, Ahmaud Arbery and Breonna Taylor have led to calls around the country for better policing and more social justice.

“I think that we are at a point where a lot of light has been shined on this,” Luria said. “What I see is a wound or a scab that has never healed and just keeps getting picked on.”

She said she found the creation in 2019 of the Black-Jewish Caucus encouraging, but that there is a partisan impasse on police reform legislation. She pointed to the George Floyd Justice in Policing Act of 2020, which was passed by the Democrat-controlled House in June, but has not advanced in the Republican-controlled Senate.

The event was organized by the Community Relations Council of the United Jewish Federation of Tidewater and the American Jewish Committee, whose Julie Fishman Rayman moderated.

Rayman asked Bobby Scott, a Democrat who is African American and represents Virginia’s 3rd District, what has been accomplished in terms of police reform and what still needs to be done.

Scott said the Jewish community is an “essential part” in the pursuit of civil rights and that criminal justice reform has come a long way. But the crackdown on crime in the 1980s and ‘90s did little to reduce crime and instead filled prisons.

“Regrettably, for decades, certainly through the early ‘80s through the mid-90s, the slogans and sound bites were carrying in the day,” Scott said. “And slowly but surely, it did nothing to reduce crime.”

Scott said he encourages a fair and evidence-based approach to crime and policing, and that the Justice in Policing Act embodies those principals.

Asked if he favored defunding the police, Scott said no. The issue in the George Floyd murder is the lack of accountability for police officers to discourage those kinds of actions.

Rep. Don McEachin, a Democrat who represents the 4th district, asked about the role religion can play in healing rifts and combating hate. A Baptist minister and an African American, he was also asked what people should do when a member of the clergy is spewing hate.

McEachin urged people not to put clergy up on a pedestal and follow their position solely because they are spiritual leaders. He also said people need to treat others as they would want to be treated and to reject the idea of otherness.

“We need to remember that we all made an image of God, and that no matter how different we are, we’re just reflecting the diversity of God, of our creator,” McEachin said.

An audience member asked what the Black-Jewish Caucus can do in response to the recent string of anti-Semitic remarks made by Black celebrities, athletes and Philadelphia NAACP President Rodney Muhammad.

McEachin said community leaders must be aware of such comments, so that they can call out hate in all of its forms.

“Some things are said that are regrettable,” Scott said. “And we need to just continue recognizing it. Martin Luther King said that injustice anywhere is a threat to justice everywhere. And likewise, bigotry anywhere is an invitation to bigotry everywhere. That’s why when we see it, we have to speak out.” 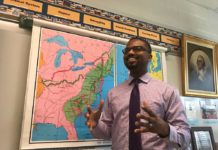 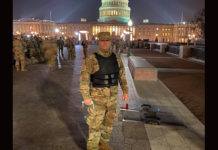