Richard Schifter, a Holocaust survivor who served as an American diplomat, has died at the age of 97.

Schifter was born in Vienna to Polish parents. At the age of 15, he received a visa to go to the United States. The rest of his family died at the hands of the Nazis.

He served in the U.S. Army as one of the Richie Boys, a unit of young Jewish-German refugees who the Army trained in psychological warfare. He later graduated from Yale Law School. He was a leading figure in the Montgomery County Democratic Party.

Under Presidents Ronald Reagan and George H.W. Bush, he served as assistant secretary of state for human rights and humanitarian affairs.

In a eulogy, Rabbi Stuart Weinblatt, of Congregation B’nai Tzedek in Potomac, said  Schifter “stopped learning, growing or doing. Here he was, in his late-90s reading, writing articles, making calls, setting up meetings, to work on changing the course of history, and still learning — taking a class about Israel’s prime ministers.”

And he knew some of those prime ministers personally, Weinblatt said.

“I invited him to speak at our synagogue and to various groups of rabbis on a number of occasions,” the rabbi continued.  Each and every time he spoke, people were enamored by his command of history, facts and details; his extraordinary memory made an impression, as did his perceptive analysis of realpolitik and how to bring about change.  I often felt his tenacity was so strong, he was determined to change the UN, almost singlehandedly, even if it meant the tedious process of trying to influence one nation at a time.” 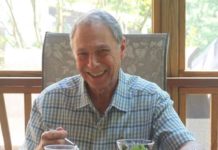