A reporter and member of the Chasidic community in Borough Park was cornered and threatened Wednesday night as protests against New York Gov. Andrew Cuomo’s new restrictions on areas experiencing COVID upticks continued in Borough Park.

Jacob Kornbluh, a Chasidic Jew and a political reporter at Jewish Insider, said in a tweet that he was “brutally assaulted, hit in the head and kicked at by an angry crowd of hundreds of community members of the Boro Park protest.” Kornbluh said he planned to press charges.

He said Heshy Tischler, a local figure who has become a leader of the movement to defy COVID restrictions, had “ordered the crowd to chase me down the street.”

Video posted to Twitter by Jake Offenhartz, a reporter for Gothamist, showed a large crowd gathered around Kornbluh with Tischler at the center, shouting in Kornbluh’s face while unmasked. “You’re a moser,” Tischler is seen screaming. “Everybody scream moser!”

“Moser” is a Jewish legal term for one who informs on Jews to the secular authorities, and some Jewish legal authorities suggest that a “moser” is subject to the death penalty. Kornbluh and Mordy Getz, a Chasidic businessman, had been called “mosers” in an anonymous flyer that circulated in April after they spoke out about the need to wear masks and follow social distancing guidelines. Tischler had called Kornbluh a “moser” and a “rat” in a video he posted to Instagram earlier Wednesday from a cemetery.

The incident comes just one day after Getz’s brother, also a member of the Chasidic community, was beaten up after taking videos of Tuesday night’s protests. The conflicts and the protests mark a new defiant phase in the Chasidic Orthodox community’s response to government-imposed restrictions due to the pandemic.

Where Tuesday night’s protest targeted New York authorities who are cracking down on large gatherings, including at synagogues, and mask-wearing, Wednesday’s protest looked and felt more like a rally to support President Donald Trump. People at the event carried large Trump flags and signs.

“I want to thank the police officers who helped us so much tonight. Blue lives matter,” Tischler said, speaking from a stage over a sound system to loud cheers.

A voice note circulated on Twitter earlier that night in which the person speaking claimed that the Trump campaign requested that people bring signs reading “Cuomo killed thousands” to the protest on 13th Avenue in Borough Park.

By 11 pm, police attempted to disperse the large crowd but many refused to leave the area.

Tischler publicized the gathering on social media Tuesday night and Wednesday as a show of civil disobedience to counter new restrictions announced by Cuomo in areas with upticks in cases of COVID-19.

“Reprehensible attack–instigated by a CANDIDATE FOR CITY COUNCIL–against a courageous journalist who has dared to stand up for public health throughout this pandemic,” Mark Levine, a member of the New York City Council, wrote. “There must be accountability for this vile act.” 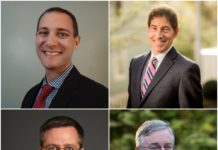 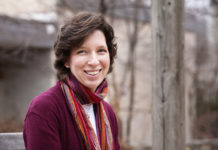