Writer, performer and disability advocate, Tyler Vile is the author of “Never Coming Home,” a novel in verse, and “Hassidic Witch Murderer: The Official Videogame of the Poems,” an interactive poetry zine. The 27-year-old Baltimore native makes sure to include women, LGBTQ characters and characters with disabilities in her work.

She is a member of the Baltimore Transgender Alliance leadership team and the vocalist in the punk band Anti-Androgen.

Poetry offers us a level of reconstructing everyday language. We can think of everything we say to each other as literature. There would be no life without language; “In the beginning was the Word.” So, all language is spiritual but also grounded. Whether I’m writing a poem or a story or an article or a sermon, there’s always some kind of angle to make it my own and creative.

What does representation mean to you, as a member of the LGBTQ+ community?

Representation to me is the opposite of tokenism. I think a lot of media is conflating tokenism with representation. In terms of an identity, whether LGBTQ or POC or disabled, we are seeing more characters from more diverse experiences, but sometimes they don’t get the level of nuance that straight, white, cisgender able-bodied characters get.

I think about “Stranger Things,” where they introduced the gay character. She gets a monologue but the straight characters get full romances.

So one show I’m watching that I enjoy the representation on is “Schitt’s Creek.” I think it does a wonderful job of weaving in the complexity of different identities with a Jewish sense of humor.

What else do you watch?

I like anything with a good narrative. One of my favorite comedies is “The Frisco Kid” with Gene Wilder and Harrison Ford in a Jewish community. Oh my God, it’s so funny! There’s one scene where Gene Wilder won’t get on a horse because it’s Shabbos so they’re ducking their heads to see when the sun sets.

“Moonlight” is really wonderful. I read the play it was based on. It had a rich texture to the language. You can tell, oh that’s why they shot this scene that way. It inspired me to get back into writing screenplays.

What about your identity are you proud of?

Being a family member of Hinenu [The Baltimore Justice Shtiebl that she co-founded]. It’s something that is going to outlive me. You grow up in Baltimore and see these old synagogues that have been here since the turn of the century. To be a 3-year-old baby synagogue that started with a couple of us around the table having coffee dreaming about what it could be, it’s blossomed into this incredible thing.

You have been open about your cerebral palsy. What do you wish people knew about it?

Cerebral palsy is an umbrella diagnosis, meaning that no two people are going to experience symptoms in the same way. I have a bunch of friends with cerebral palsy and we all have different experiences.

[Secondly], there’s a lot of narrative around kids with cerebral palsy but you realize there’s not as much support for adults. We’re one of the only states with a department of disabilities. What I’ve had to learn is there are a lot more resources, but they aren’t publicized.

What does your Jewish identity mean to you?

I was raised Jewish and I could have easily [left] it behind. But I never did. This is not about whether or not my parents are Jewish. I am grateful for the education I had and being bat mitzvahed. I’m grateful for the foundation that gave me. It also is more about what I’ve done with it, in my personal relationship with Jewish spirituality and history and culture. I actually want to be a rabbi hopefully, but I have to get my degree first.

What do you wish you were asked?

I would love to talk about the process of community care. If it weren’t for Hinenu and my broader Jewish community, I would be alone. To have people I care about, to say Kaddish with every day, it really gives me a lot of hope and purpose and comfort. 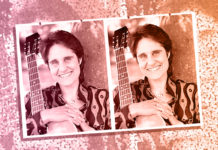 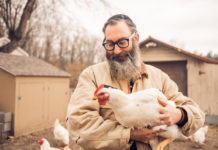 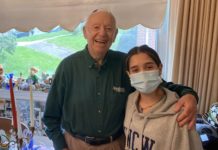