Gabriel Key didn’t set out to become a chef. In fact, his bachelor’s degree was in East Asian studies and communications. But a fateful encounter led him to quit his job, sell his car and leave everything behind to work at a restaurant in Italy. That experience set the stage for his latest venture. Heard of craft beer? Well, this is craft pasta.

Each week, the 46-year-old Herndon resident makes a batch of noodles by hand. Under the name Foggy Mountain Pasta, he sells his artisan pasta directly to restaurants and at farmer’s markets across Northern Virginia. He said he started the business out of a need to support his family, a desire to be his own boss and a passion for food.

Key had discovered that this area’s wheat is of high quality. So he set out to create a product that utilized local wheat. But as Key was never much of a baker, he decided to make pasta.

“Wheat is much more than this white, starchy thing that people buy in Wonder Bread,” Key said. “I really felt like there’s a tremendous amount of local wheat in North Carolina and Virginia that is just sucked up to the commodity food chain, and just doesn’t get rewarded.

“The food that can come out of Appalachia is just overlooked. And so I wanted to create a food product that really honored a lot of those local traditions I grew up being around,” Key continued. “I love eating pasta. I love making pasta. And with great local wheat, it’s a great product.”

Key, who is Jewish, moved with his wife from North Carolina to Herndon two years ago to follow her career. Growing up in Portland, Ore., Key and his family ate locally grown food and kept a small vegetable garden. But his passion for cooking didn’t really develop until later.

In 1996, he earned his bachelor’s degree and, as a graduation present, his parents took him to Florence, Italy. One night, they went out to dinner and Key fell in love with the restaurant.

That night the chef stopped at their table and asked how they enjoyed the meal, “I was just gushing,” Key said.

He told the chef that he wanted to make food just as good someday. The chef said that if Key was serious, he should return to the restaurant the next day. So Key did, and waited three hours for the chef to show up. But the two ended up talking and Key was invited to come work at the restaurant.

Until then, Key’s only professional cooking experience was doing prep work at a restaurant in his college town. He decided to take the chef up on his offer.

Key spent the next two years working at restaurants in Northern Italy and Southern France. Before returning to the States, he studied at Le Cordon Bleu Paris and the Italian Culinary Institute for Foreigners.

Back home, he worked various jobs in the food industry and eventually studied food policy, among other subjects, at the Monterey Institute of International Studies in California and at the University of Gastronomic Sciences in Italy. All of these experiences moved Key along the path to starting Foggy Mountain Pasta.

Before the pandemic, Key was selling his pasta at farmers’ markets in Alexandria, Arlington and Reston. Local restaurants were also among his clientele.

“Obviously during the time of COVID, those accounts are not as active as they used to be,” Key said. “So we have opened up an online ordering for home delivery option, which I’d never planned on and never really had the desire to do. But when this whole thing hit in mid-March we got it up and running, trial and error, and got it working.”

Key said he is looking to expand his online business to allow for shipping. Another consequence of the pandemic was the rise of the recent “making bread from home” craze that left many local wheat farmers out of stock. So Key has had to use different blends of wheat.

“I welcome those opportunities to have a little innovation forced upon you,” Key said. “I think that’s when you come up with new ideas. And that’s good, versus just producing the same thing every single week.” 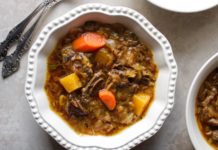 This beety, beefy cabbage soup is perfect for quarantine