Trenice “Terry” Dodek Goldstein, of Chevy Chase, passed away on Nov. 9. She was 93. Terry was a longtime remedial tutor in Chevy Chase and the former director of tutoring for the Kingsbury Center. She was predeceased by her beloved husband, Dr. Lloyd Goldstein; eldest son, Wayne; and brother, Dr. Oscar I. Dodek, Jr. She is survived by her brother, Sam Dodek II; sister-in-law, Joan Dodek; sons, Jim (Tina) Goldstein and Tom Goldstein; grandchildren, Sarah, Rachel and Mathew; and great-grandson, Eli. Donations may be made to League of Women’s Voters of Maryland at lwvmd.org. Services entrusted to Sagel Bloomfield Danzansky Goldberg Funeral Care. 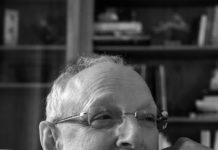