Chanukah will likely be observed in this ongoing health crisis by nuclear families or people living under the same roof. In many cases, this will leave grandparents and great-grandparents stranded at home, shut out of Chanukah candle lightings, dinners and parties.

Although these measures are for their safety, this separation may increase their sense of isolation.

But there is something you can do: Make a portable Chanukah dinner and drop it at their homes.

Deliver food in attractive bags filled with disposable containers. Tape clear preparation instructions to the tops. Recipes that don’t require reheating, such as salads or roasted vegetables, are recommended. Pack a small jar of applesauce to accompany latkes. Include a pastry for dessert. Add paper plates and cups with a Chanukah theme and plastic silverware.

For convenience, cook the same recipes for your nuclear family, but make extra servings to give away.

Traditional holiday delicacies prepared by loving hands will bring the warmth of the Festival of Lights to cherished family members and friends. Providing food to the elderly is the most thoughtful gift you can give this Chanukah.

Accumulated wisdom says that the best potatoes for latkes are starchy and low in moisture. Russet Burbanks are supposed to be the best, but King Edwards or Yukon Golds will also work well.

Directions
Peel the potatoes. Cut them in half to fit in the food processor’s feed tube. Using the grating blade, process the potatoes. Place a colander over a mixing large bowl. Move the grated potatoes to the colander and let them sit for 5-10 minutes to drain. Squeeze more moisture out of the potatoes with your palm.

Add the remaining ingredients (except the oil). Mix well with a wooden spoon.

Fill two large skillets with ¼-inch of corn oil. Heat over a medium flame. Take rounded tablespoons of grated potato. Flatten them with your palms and squeeze out the liquid into the sink.

Place the raw latkes in the oil. After a couple of minutes, they will rise. Keep flattening them with a firm spatula. Fry the latkes until golden brown and turn them over, frying until golden brown on the other side. Add more oil as needed.

Note: The grated potatoes will continue to weep, creating more water. Tip the bowl and pour it into the sink as it accumulates.

Place two layers of paper towels on a platter. Drain the latkes on paper towels. Sprinkle on more salt. Serve immediately or keep warm in a 200-degree oven. The recipe can be reheated in a 350-degree oven until slightly sizzling.

Directions
Heat your oven to 425 degrees. Coat a large ovenproof pan, such as Pyrex, with nonstick spray.

Rinse the zucchini well under cold water. Pat it dry with paper towels. Cut off both ends and discard. Cut each zucchini into thirds crosswise, so you’ll have three barrel-shaped pieces.

Then cut each third into four vertical slices, which are rectangular, not round. Move them to the prepared pan. Drizzle the zucchini with olive oil and gently stir to coat each piece. Add more oil, if needed. Sprinkle both sides with salt.

Place each zucchini piece skin side up and flesh side down. Roast for an hour, turning every 15 minutes, so the flesh side is up at the end. Zucchini is ready when the flesh is golden brown. Serve immediately or at room temperature. The recipe can be reheated at 350 degrees, or it can be microwaved.

Directions
Heat your oven to 425 degrees. Coat a roasting pan and rack with nonstick spray.

Rinse the chicken under cold water. Pat it dry with paper towels. Sprinkle both sides of the chicken with rosemary, garlic powder, salt and pepper. Use more of each spice if needed or desired. Place the chicken on the roasting pan rack.

Roast for 45 minutes, turning every 10 minutes, until the skin is crisp and a knife inserted at the joint produces clear, not pink, liquid. Serve immediately or at room temperature. The recipe can be briefly reheated at 350 degrees.

Place the egg, brown sugar and vanilla into a large mixing bowl. Using an electric beater, mix on a low speed. Add the flour, baking soda, salt, cinnamon and nutmeg. Mix until well combined. Stir in the pecans.

Spread the dough in the prepared pan. Bake for 20 minutes, until the edges turn golden but the center is still soft. A cake tester inserted into the center will come out almost clean. Do not overbake.

Cool to room temperature before cutting it in squares. Cut four rows across and four rows down. Serve while warm or at room temperature. Pecan squares can be stored in an airtight plastic container for two days. They can be frozen. 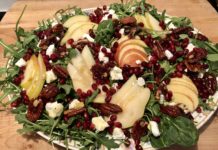 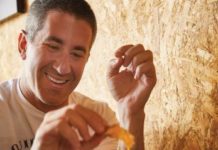 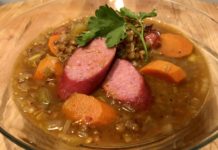 French lentil and sausage soup. A meal in a bowl.