Sixty-five years ago, David Ben-Gurion visited our community.  The modern State of Israel was three years young and its first Prime Minister was on a three week tour of the United States for official business and to launch the Israel Bonds program – an initiative that has raised nearly $40 billion in direct investment into the development of the Jewish State.

On Tuesday, May 8, 1951, after concluding a meeting with President Harry Truman at The White House; following a 40 minute conversation with then-Secretary of State Dean Acheson at The State Department; and after broadcasting, in Hebrew, a message on Voice of America – the Prime Minister left DC and traveled to Rockville, Md., where he inaugurated the Israel Bonds program in our region at the Woodmont Country Club.  Just one week earlier, on its first day, bond sales equaled $15 million and nearly 20,000 individuals attended the launch of the program at Madison Square Garden in New York City. 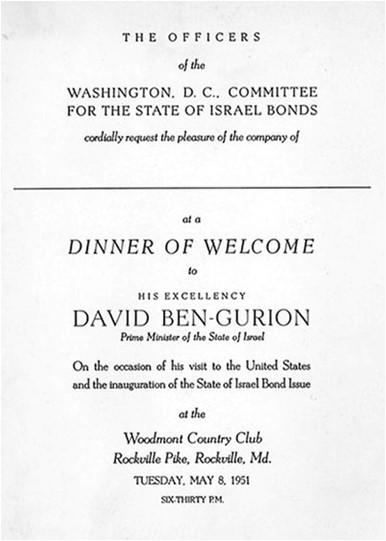 Fast forward to May 8, 2016, and three young professionals from Washington, DC, displayed their American passports at Ben-Gurion International Airport in Tel Aviv.  They were participating in this year’s Israel Bonds International Leadership Delegation, which took place from May 9-15 in Jerusalem, Tel Aviv, Haifa, and in other cities across Israel.  Leaders from nearly 20 countries on three continents took part in the 140 member delegation.

Eleven men and one woman have served as the Prime Minister of Israel.  The delegation included a meeting with the current Prime Minister, Benjamin Netanyahu.  Earlier this year, in congratulating Israel Bonds third consecutive year in exceeding $1 billion in the U.S. in investments, the Prime Minister said, “it is not just the economic aspect of this, it is the fact that you are making an ‘Israel bond’ – a bond with the Jewish people.”  Netanyahu provided brief remarks and then opened the floor to our delegation.  We held a conversation about fiscal, social, and international policies related to the Jewish State and all of her citizens.  The Prime Minister answered all questions.

Earlier in the day, the President of Israel Reuven Rivlin hosted us at his residence.  The seventh generation Jerusalemite, said “I have witnessed the miracle of seeing the ‘desert bloom’, and the ‘hi-tech boom,” – alluding to successes of drip irrigation and the startup nation prowess of Israel today.  At the meeting he noted that “we could not have achieved all this without your support” and that “Israel Bonds is not just a way to show support for Israel, it is a way to show faith in Israel; faith in our growth, faith in our development, and faith in our future.”

While also in Jerusalem, the delegation held a dinner at The Israel Museum that featured keynote remarks by Jerusalem Mayor Nir Barkat.  The Mayor provided an update on the new train line that will connect Tel Aviv to Jerusalem in just 28 minutes and the city planning surrounding the new train station in Jerusalem, which will – in seven years – have available nearly 10 million square feet of business space consisting of 13 towers that are 35 stories tall to provide the infrastructure to create a broader technology hub in Israel’s eternal capital city.

Earlier in the week, the delegation headed north, to Haifa where we too met with the mayor and also visited the Israel Naval Base in the city.  Haifa is Israel’s third largest city and it includes the largest of Israel’s three international seaports.  Mayor Yona Yahav spoke of the coexistence of all of Haifa’s citizens – where historically and into today – the Jewish and the Arab citizens work and live together in prosperity.  He also provided comments of how the city is proud to be the home to the Bahá’í World Centre.

Outside of the education attained during the delegation from speaking with these Israeli leaders, the most powerful moments came during our time mourning the 23,477 Israeli soldiers lost in battle and the citizens who fell to acts of terror while observing Yom Hazikaron (Memorial Day) where we heard from the parents of Lt. Hadar Goldin, who lost his young life in Operation Protective Edge in Gaza and whose remains are still being held captive by Hamas or when David Matz, the national new leadership chairperson for Israel Bonds, laid a wreath at the Wall of Names of fallen soldiers of the Armored Corps at Latrun.

And then following Yom Hazikaron and the standing in silence as the alarms sounded, we transitioned – with all Israelis – to celebrate Yom Ha’atzmaut (Israel Independence Day) and our own personal bonds with the Jewish Democratic State of Israel.

Jason Langsner of Capitol Hill is the volunteer chairman of the Israel Bonds New Leadership Division in Washington, D.C.  He, Jenny Diamond, and David Matz represented the D.C. region in the 2016 Israel Bonds International Leadership Delegation from May 9-15, 2016.