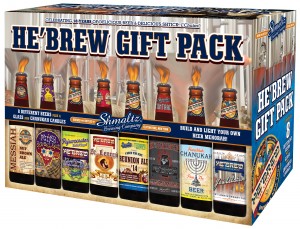 Using the slogan, “This Chanukah, Candles won’t be the only thing getting lit!,” the Shmaltz Brewing Company –  famous for its He’Brew, the Chosen Beer –  has come up with its latest beer just in time to celebrate the eight-day festival of lights.

Hanukkah, Chanukah, Pass the Beer is a dark ale brewed with eight malts and eight hops and sports an 8 percent alcohol by volume and is, according to the Shmaltz company literature, “destined to become the official chosen beer of the holiday season.”

Not to be satisfied with just one holiday miracle, the company has redone its Jewbelation 18 by upping its ingredients and strengths to 18 malts, 18 hops and 12.4 percent ABV.

The gift pack includes a custom glass and a painting to show how to build your own beer menorah using eight bottles of He’brew offerings along with a shamash bottle, all topped off with a candle.

This is the company’s 18th year – a significant number in Judaism – and company founder Jeremy Cowan plans to celebrate the way he has always done, by having a good time. The idea, Cowan said, is to make beer “ideally hilarious and delicious.”

True, he said, his company is $4 million in debt, but he has 10 years to pay that off. Sure, he pays $10,000 a month in rent, he pointed out. But, coming up with those whimsical names and slogans “keeps my sanity,” Cowan said.

This all began in 1996 in San Francisco when he, and a few friends “hand-brewed and hand-labeled” 100 cases of beer. Cowan then personally delivered each one in his grandmother’s Volvo, he said.

Eighteen years later, the company has 30 employees, is delivered in 35 states through 40 wholesalers and has nearly 5,000 retailers selling its beer. The company has a large brewery in Clifton Park, N.Y., near Albany, that makes 120,000 cases a year.

Cowan likes to brag that his beer company is the largest in America and has won the most awards when compared with other Jewish-themed craft brews. In this regard, his competition is – well, he has no competition. But there are some 3,000 small and medium-size brewers in the United States that are brewing their own beers.

The way Shmaltz Beer has survived this long, according to Cowan, is due to its focus on unique flavors.

Shmaltz Beer can be found in Whole Foods and Total Wine & More and is served at Star & Shamrock Tavern and Deli in D.C.

While the names of its beers clearly are Jewish, Cowan said his target drinking audience is everyone. “You don’t need to be Irish to drink Guinness” beer, he said.

Cowan grew up “a California suburban Reform Jewish kid.” When he was 25 years old, he lived in an observant community for five months. “When I came back from that, I wanted to do something in connection with Judaism and decided craft beer would be the way to do it,” he said only partially joking.

Shmaltz Beer is “the ultimate answer” to the age-old question, What can you do with a B.A. in English? Cowan declared.