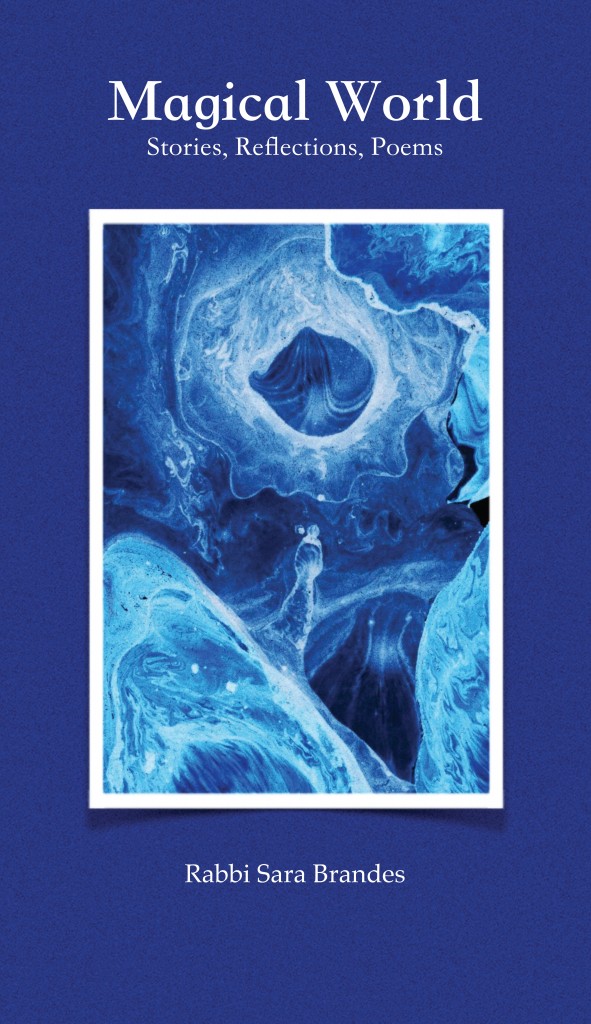 I must admit that I approached Magical World with more than a few misgivings, especially after I read the book-jacket blurb noting that author Rabbi Sara Brandes was a “student of world religion and a certified yoga instructor.” Another quirky New Age rabbi, I thought, who strips Judaism of its content, leaving a thin gruel of feel-good optimism covered with a patina of tikkun olam. No wisdom of Pirkei Avot (Ethics of the Fathers), no thundering against sin by God-obsessed prophets, no lyrical beauty of the psalms.

I was completely wrong.

Brandes may be a mystic, but she’s not off the charts Jewishly. Many of her beliefs are in the Jewish mainstream — or maybe just an ooch outside of it.

She stresses the importance of learning, but with her own twist. Our “historical memory” encompasses 5,000 years of being Yisra-el, the people who wrestle with God, she writes. “Our memories recall our struggles — our cosmic dance with God.”

As we learn, we add to our overall understanding. When two students sit together to learn, they continue with “the great legacy of the Jewish people, those who wrestle with God. Every pair … evoke the flame of God in their midst. …”

The wisdom acquired from such study sessions “is integrated into our people’s long history. It too becomes part of our sacred memory. In this way, the Torah is revealed by each of us, within each of us”

She also has reinterpreted one of our ancient texts in a fascinating way. The rabbi writes that we can use the two landmarks of Jewish history — the revelation at Sinai and the journey to the Promised Land —not as history, “but rather as claims of possibility. It is possible to organize one’s life around two pillars, the flash moment of insight, in which we know deeply who we are and the potential arrival at our own promised land. This is the Jewish story.”

However, it is tough to “journey from Sinai” because the miracle of revelation isn’t an everyday occurrence. But the Torah has provided us with “a path from revelation to redemption” called Halacha. “It is a holy journey,” she writes, offering “holy moments and holy days” as markers. By pausing at those moments, we “create space for the Divine.”

In addition to religious commentary, Brandes presents some of her poetry, and tells an abbreviated story of her life. After meeting Diane, a teacher, and her mate, Hyim, and living in Israel for two separate short periods of time, she decided to become a rabbi and study at the Jewish Theological Seminary. “In rabbinical school, before I became a rabbi, I became a feminist, an activist, a yogi, an aspiring priestess and a mother,” she writes.

Apparently, Brandes was not a conventional JTS student. She describes how she walked out of a prayer service in her first year of study, surely not endearing herself to her teachers and fellow students.

“There we were, engaging in the timeless ritual of Jewish prayer, and nothing was happening,” the rabbi writes. “In that moment, it felt as though I was the only one in the room who expected to talk to God, and expected God to respond. …

“That day, I lost faith in tradition; or, more precisely, in doing something only for tradition’s sake. I committed myself instead to studying our texts, to excavating our memories, so that I could bring them again to life.”

She and her family made aliyah in 2014 and live on Kibbutz Hannaton, the Masorti (the Israeli Conservative Movement) kibbutz in the lower Galilee. She loves the togetherness of kibbutz life. “The kibbutz environment … redefines the privacy/openness questions entirely. Here we are together. We just are. Privacy is negotiated from within the context of the community; so far, it feels much better.”

If not for this review, I almost surely would not have read Magical World. That would have been my loss, for it provided some thought-provoking and inspirational moments.

And, for those Jewish mystic wannabes, Magical World, especially with its discussion of the Tree of Life and its sefirot (divine attributes), may jump-start your mystical odyssey.