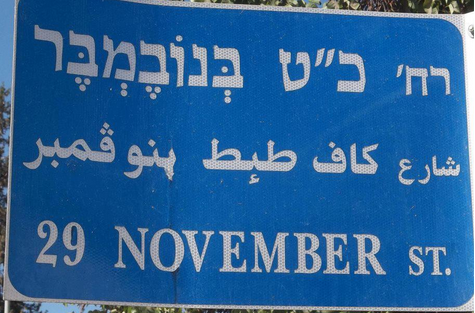 One of my favorite roads in Jerusalem is “Kaf Tet beNovember Street.” It goes through the neighborhood of Katamon, where I used to spend a lot of time. But more than the street itself, I love the name. Kaf Tet beNovember is not just a street name – it is a date – today’s date – the 29th of November.

On this date in 1947, the UN passed Resolution 181, which called for the end of the British Mandate in Palestine by August 1, 1948 or earlier. It also called for “Independent Arab and Jewish States and the Special International Regime for the City of Jerusalem” to be established – a resolution that the Jewish people accepted, but the Arab nations did not.

But who names a street after a date? Can you imagine a “4th of July St” in America? What is more astonishing is that this is not Israel’s Independence Day (and I am pretty sure there aren’t any “Yud Dalet bMei” streets). When one considers the actions of the UN toward Israel in recent decades, the fact that there are streets throughout Israel named for this date is even more remarkable.

Neither the Balfour Declaration (whose 100th anniversary we just marked) nor the UN vote was sufficient to establish a Jewish state. That part of Herzl’s dream would only be realized through the difficult battles of the War of Independence and the wars that followed.

But it did fulfill a portion of his dream – for the dream was not only a state, but a state that would give the Jewish people legitimacy and recognition on the international stage.

I believe Israel would have been established with or without a UN vote.   But just like his ancestor Abraham who insisted on paying full price for his wife Sarah’s burial plot that had been offered him for free, Herzl (and those who followed him) understood that following the established procedures would create a permanency that is difficult to uproot.

Thus, it is not the establishment of a Jewish state in the land of Israel that we celebrate today. Rather, it is the international recognition of the right of the Jewish people to live as a free people in our ancestral homeland.

In a world in which Israel’s legitimacy is under attack across the globe, it is important for the Jewish people and for the world to remember this lesson.

Seventy years ago today, the world recognized Israel’s right to exist. Today we should remember and celebrate, even party on the streets. Perhaps on Rechov Kaf Tet beNovember.