Prepare for a Jewish community tour of Northern Virginia. We’ll take you everywhere from Fairfax to Herndon, stopping at five synagogues along the way. Fill up your gas tank and hit the road for Falls Church’s Westmoreland Street, and our first stop. 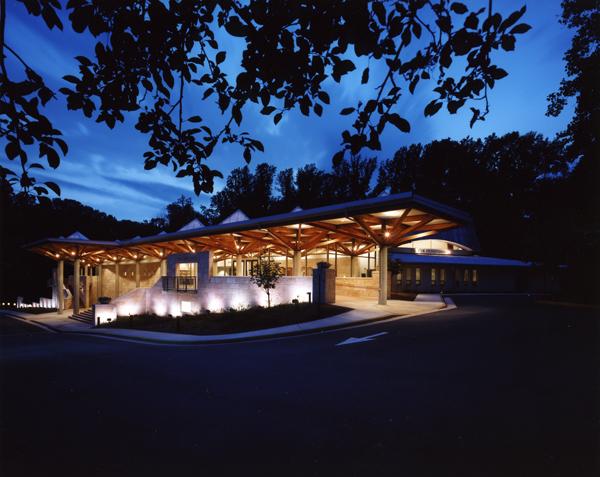 Temple Rodef Shalom celebrated its 50th anniversary in 2012. What began as a small group of Jews looking to build up a Jewish community in the area has now grown to become the largest synagogue in Virginia. Their 1,600-family community comes from near and far, and their programming for all ages allows people young and old to gather together at the Reform synagogue.

“We’re the only synagogue within a huge [geographical] circle,” said Senior Rabbi Amy Schwartzman. The congregation’s 1,600 member families come from many Northern Virginia areas, including McLean, Arlington, Falls Church and Vienna – 80 percent of them live within eight miles of the synagogue, Schwartzman said.

“Our number one obstacle and our number one asset is our size,” Schwartzman said, citing the challenges of making such a large community feel small and homey, as well as the opportunities that are brought from the resources of a 5,000-plus member synagogue.
“Despite its size, it is very welcoming,” said Cantor Allen Leider, the temple’s
director of lifelong learning. “There’s something personal about Rodef.”

Temple Rodef Shalom is “profoundly committed to social justice,” said Schwartzman. For example, the synagogue is the only one in the area that provides health care to its maintenance staff, who are hired through an outside company. It also serves as a hypothermia shelter for the homeless during the winter.

Rodef features three playgrounds, one of which, called “Bunny’s Place,” is made of all-natural elements – there is not a scrap of plastic to be found in the equipment.

Bunny’s Place sits across the vast parking lot from the expansive synagogue, nestled among the woods that separates the synagogue’s property from the neighboring Haycock Elementary School.

The temple is also a Jewish representative within the local religious community, as it is “the most easily accessed Jewish address” within the Falls Church secular community, said Schwartzman.

“We want the experience here to be happy as well as inspirational [and] deeply religious,” said Schwartzman. “It is a place of joy and inclusion and integrity.”

The next stop on our tour of the Northern Virginia Jewish community takes us to Fairfax.

Situated in a residential neighborhood less than a mile from the Jewish Community Center of Northern Virginia is Congregation Olam Tikvah, Fairfax’s Conservative congregation. The 645-family synagogue does not have a cantor on staff. Instead, according to administrator Rachelle Palley, members of the community lead all prayers.

Even when some services are led by Senior Rabbi David Kalender or Assistant Rabbi Ita Paskind, it is “as members of the community,” said Palley.

And those who lead services range from recent b’nai mitzvah to the synagogue’s oldest members.

“Kids know they’re not just learning a skill set for one day” when they study for their bar or bat mitzvah, said Debra Beland, the synagogue’s director of education and youth activities.

At a recent celebration of Israel’s Independence Day, the synagogue hosted a community barbecue, featuring a gaga pit and a program including singing and dancing.

“The joy during the dancing and the gravitas and pride you could feel when everyone sang “Hatikvah” together at the end, that was really special,” said Paskind.

Olam Tikvah recently celebrated its 50th anniversary as well as hosted a delegation from the Israel’s Har-Tuv High School, which Gesher students visit during their eighth-grade trip to Israel. American and Israeli students were matched up in a way that Beland described as “almost like speed dating.”

The American students stayed in their seats while Israeli students rotated following brief conversations with one another.

“This forced even the shyest kids to engage,” said Beland.

This, Beland said, is indicative of the environment that Olam Tikvah and the local Jewish community provide. The synagogue tries to find the right kind of programming that will engage all of its members.

And what happens when events get a little chaotic?

“Chaos is kind of the goal,” Beland said. “We want [our events] to be full of life.”

Buckle up for a 10-mile drive south, because we’re on our way to Temple B’nai Shalom. 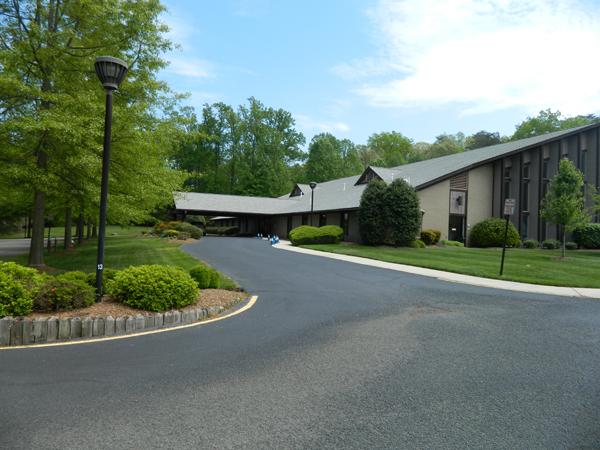 Make sure you don’t miss the hidden turn off of Ox Road onto Old Ox Road. Once you make that turn, signs will lead you to Temple B’nai Shalom.

In the H-shaped building, its sanctuary, with a capacity of 300, is normally filled on Friday nights, especially for the monthly family Shabbat.

The synagogue’s rabbi, Amy Perlin, has been with the Reform congregation since its founding in 1986 and remains its only full-time clergy.

In its 28 years, B’nai Shalom has grown to almost 500 families, all of whom are active in the temple’s goings-on, according to Lynn Richmond, director of member services.

Richmond said that the synagogue has an active brotherhood and sisterhood, and that their best events involve members of all ages.

Recently, she said, the congregation took part in mitzvah day, an annual day of good deeds, in which people collected food donations, recycled electronics, made peanut butter and jelly sandwiches for the homeless and helped the synagogue with its own needs.

The food donations, which went to the Lorton Community Action Center, totaled more than 600 pounds.

Much of the temple’s success, she said, is driven by its school.

“A lot of our stuff is organized by the school,” she said, including a monthly tot Shabbat led by Perlin.

“The prayers [at tot Shabbat] are specially put together so kids can connect with them,” said Richmond.

Generational continuity and innovation are both goals of B’nai Shalom, Richmond said. The L’dor Vador program features lower dues for children of members once those children turn 23.

Richmond says one of the synagogue’s greatest strengths is its ideal size, which
allows it to host a wide range of activities while maintaining a tightly-knit and close community.

Hop back in the driver’s seat and go 15 miles northwest, because our next stop is in Herndon. 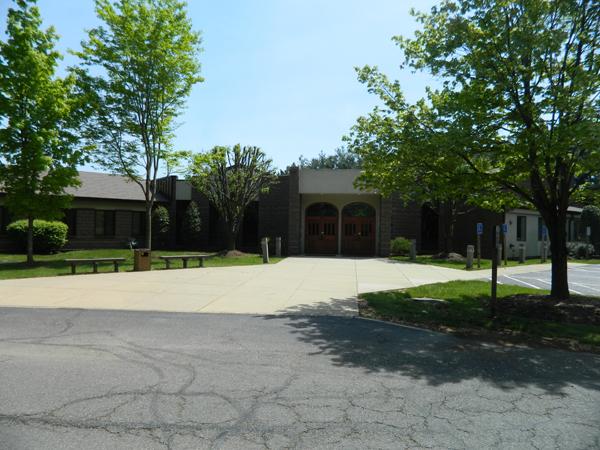 “This is a very happy and somewhat laid-back congregation,” said Rabbi Michelle Goldsmith.

Goldsmith, who will tell you to call her Rabbi Mina, is not even a year into her tenure at Beth Emeth, but she’s already made quite an impact.

“It is the most efficiently run congregation I’ve ever been involved in,” she said.

The 400-member Conservative synagogue rarely has down time. “This building is busy all the time,” said Goldsmith. In fact, of the last seven days, six have featured at least one event or program.

Goldsmith described the building’s unique architecture as being “not overbuilt.” The synagogue’s size, she explained, is perfect for its membership.

The vast majority of the 36-year-old synagogue’s members are age 55 and younger.

“We’re somewhat of an island” within the Northern Virginia Jewish community, Goldsmith said. “But we want our footprint to be bigger in communal events.”

The area is a hub of Jewish activity, said Goldsmith, despite others’ insistences that synagogues are far from each other, and there is no defined Jewish neighborhood. “I’ve never lived within 45 minutes of a dozen shuls,” she said.

An important part of the synagogue’s work, said Goldsmith, focuses on lifelong learning. The Chazak program “is like USY for people 55-plus,” Goldsmith said, referring to the Conservative movement’s youth group.

At the social group’s weekly meetings, often with guest speakers and performers, “they come and they eat and they do bad things to their diabetes,” said Goldsmith.

“We know how to have fun,” she said, citing their chorale’s performances, which often feature kazoos. Other events include the sisterhood’s Latke and Vodka Chanukah event and the Men’s Club’s upcoming beer brewing demonstration.

The average age of the community makes for a new feeling within the congregation for Goldsmith. “This is the first time I’m in a congregation where people are working age and are working. It adds a distinct flavor to the congregation.” Goldsmith’s last two pulpits were in Jacksonville and Sarasota, and both largely composed of retirees.

The members at Beth Emeth are, above all, welcoming, said Goldsmith.

“Not only are [the members] friendly to you the first time you walk in the door, but also the second, the third and the 500th.”

Back up near the JCC we go, up Little River Turnpike to Chabad of Northern Virginia. 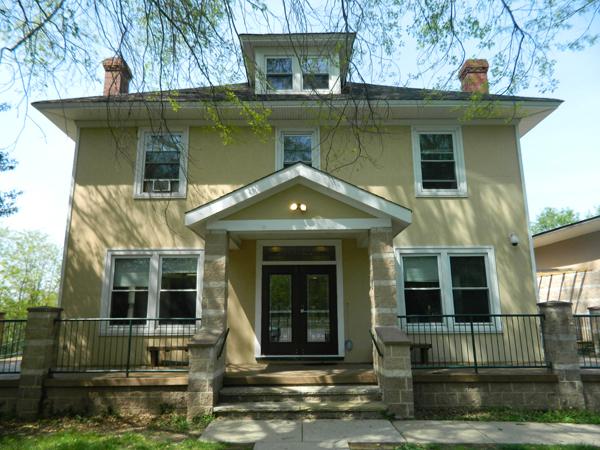 As soon as you walk inside the quaint house, you’re greeted warmly by Rabbi Sholom Deitsch.

“Fairfax has a few organizations nearby, right in the immediate area,” said Deitsch. The building, which is a house like all Chabad locations, is within a mile of both Olam Tikvah and the Jewish Community Center of Northern Virginia, whose building houses several other Jewish organizations.

There has been a stronger concentration of Jews moving to the area, he said. “It’s a very diverse group … a lot of young people in the area.”

“We have people who attend services whether they’re affiliated or not affiliated [with a particular synagogue or denomination]. The lines here are not so strongly drawn,” said Deitsch. “In other communities, you belong to one shul and that’s your home. Here, it’s a little more fluid.”

A key factor of the community is the hosting of guests, said Deitsch. There are 40-55 families who live within walking distance of the Chabad house and many are eager to host.

“People who live near the shul have taken to the custom of hachnassat orchim – taking guests into the house,” he said. “We can call people right before Shabbat” if someone is looking for a place to stay. “That’s a big mitzvah that our community specifically focuses on,” he said.

In addition to large community events such as Sunday’s Lag B’Omer event, planned with the JCCNV to begin at 5 p.m., the Chabad of Northern Virginia hosts a weekly soccer game. Each Sunday during the summer, 20-30 people come from area synagogues turn out to play, Deitsch said.

Chabad also hosts an annual soccer tournament to raise money for the children of Sderot, an Israeli city that has been the target of rocket attacks from the Gaza Strip.

Deitsch said his favorite part of his community is “the nonjudgmental openness and acceptance of people.”

“Our gist is to unite the community,” said Deitsch. “We’re here for every Jew for everything Jewish, and for non-Jews as well.”