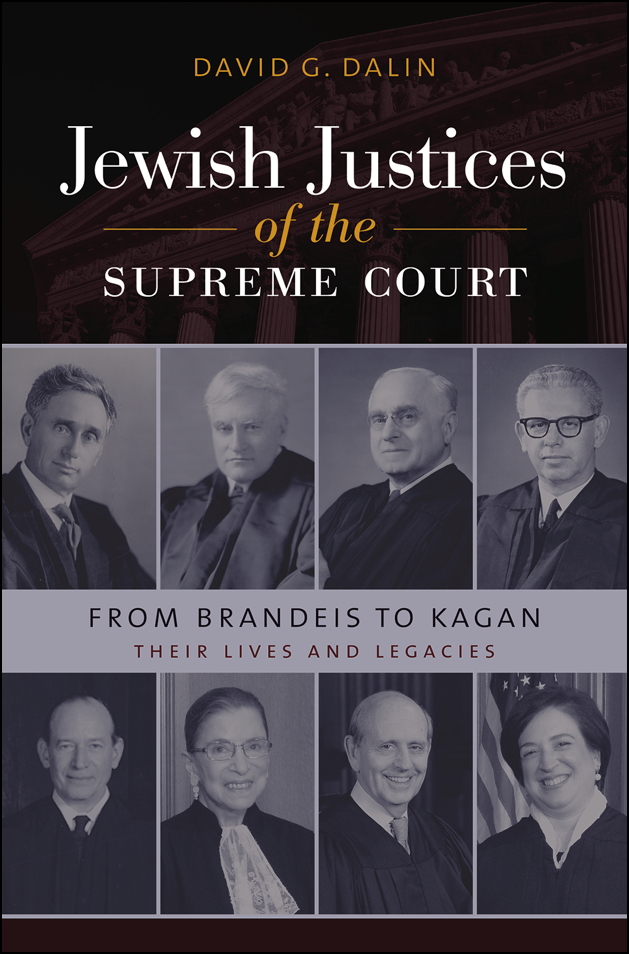 Who was the first president with the courage to nominate a Jew for a Supreme Court vacancy? And who was the potential nominee?

Well-educated Jewish Americans would reply that it was President Woodrow Wilson with his nomination of Louis Brandeis.

David Dalin’s wonderful little volume (only 284 pages of text) teaches that the first Jewish putative nominee was Judah P. Benjamin. Benjamin was a Sephardi Jew who had a brilliant career as a senator from Louisiana before resigning to serve as the Confederacy’s attorney general, secretary of war and secretary of state. After the Confederacy’s defeat in the Civil War, he fled to England where he practiced law and wrote the classic hornbook, “Benjamin on Sales.” Benjamin was offered a Supreme Court nomination by President Millard Fillmore in 1852 before taking his Senate seat. Benjamin turned down the offer because he was anticipating Senate service and a very lucrative legal practice that included Supreme Court appearances.

Dalin’s review of the history of Jewish Supreme Court justices begins with other fascinating accounts of the Jewish candidates who preceded Brandeis. Louis Marshall, the leader and spokesman for American Jewry in the early 1900’s and then a Republican, actively sought a Supreme Court appointment in 1910, when William Howard Taft was president. Dalin recounts that Taft, a dedicated Republican, explicitly rejected pleas on Marshall’s behalf from Jewish Republicans because Marshall’s partner in their Jewish law firm was a well-known Democrat.

Sparkling historical nuggets abound in this work. Who knew that Louis Brandeis, castigated for his Jewish ancestry and well-known as an ardent Zionist, loved ham? His brother Alfred would regularly dispatch hams to Washington from Louisville, and the justice would respond with expressions of enormous gratitude. Jewish religious observance played no role in Brandeis’ life or even at his death. No Kaddish was recited at his funeral, and he was, as he instructed, cremated.

Dalin describes, by contrast, the Jewish religious commitment of Benjamin Cardozo, who served from 1932 until his death in 1938 together with Brandeis. Cardozo remained all his life a member of New York’s celebrated Spanish-Portuguese synagogue Shearith Israel. He spoke persuasively against mixed-gender seating in a June 1895 meeting of the synagogue’s electors, thereby ensuring, when he was only 25 years old, that Shearith Israel remained an Orthodox synagogue.

Cardozo did not serve pork or shellfish at his home and was shocked to be fed ham when he was a guest of Brandeis. Dalin describes Cardozo’s Orthodox funeral — at which there were no eulogies — and his burial in the synagogue’s cemetery.

The first Orthodox Jewish law clerk on the Supreme Court was Louis Henkin, son of the renowned Rav Yosef Eliyahu Henkin, who became an authoritative voice on contemporary Jewish law after his arrival in the United States in 1922. The younger Henkin was an honors graduate of Harvard Law School and served as one of two law clerks to Justice Felix Frankfurter in 1946. He went on to a distinguished career as a Columbia Law School professor and a universally recognized authority on international law.

Dalin reports that on Friday nights, Henkin would “secretly sleep on Frankfurter’s office couch” to be available for meetings with the justice after the Supreme Court’s Saturday conferences. Dalin quotes Henkin’s son as hypothesizing that Frankfurter may not “even have noticed that his law clerk was keeping the religious laws.”

I was the second Orthodox Jewish Supreme Court law clerk, serving in the chambers of Justice John Marshall Harlan during the 1964 term. The justice not only knew in advance of my Sabbath observance but would send me home during conferences on Friday afternoons in the winter with the statement, “Nat, the sun is going down. It’s time for you to head home.”

Dalin’s disclosure of Frankfurter’s obliviousness to religious observance is not surprising. Dalin reports that Frankfurter’s mother did not attend her son’s wedding because, in her words, he “had chosen a shiksa as his bride.” Although he requested that Henkin recite Kaddish at his funeral, Frankfurter was otherwise insensitive to religious observance. His famous decision in the first Jehovah’s Witness flag-salute case, which rejected the constitutional claims that a Supreme Court majority upheld when the issue came before them again, showed his disrespect for claims of conscience. Unlike Justices William Brennan Jr. and Potter Stewart, who saw in mandatory Sunday closing laws an unconstitutionally “cruel choice” for Sabbatarians who had to stay closed on Saturdays for religious reasons, Frankfurter rejected the constitutional arguments of Massachusetts and Pennsylvania shomer Shabbat storeowners.

On occasion, Dalin is a little too eager to glorify the accomplishments of Jewish justices. For example, future Justice Abe Fortas was assigned to represent Clarence Earl Gideon, the Florida prisoner whose name resounds in constitutional history because of Gideon v. Wainwright, the unanimous Supreme Court decision that overruled previous precedent and declared that any indigent person charged with a felony in a state court was entitled to the assistance of a court-appointed attorney.

Dalin reports that the court appointed Fortas, then a leading member of its bar, to represent Gideon. He adds: “When the case came up for argument in January 1963, Fortas spoke before the Supreme Court for more than an hour, passionately insisting that it was impossible for a criminal defendant to have a fair trial without an attorney speaking on his behalf. Fortas won the case, convincing a unanimous Warren court that Clarence Gideon could not adequately defend himself, and the justices ruled in Gideon v. Wainwright that every indigent criminal defendant must be given free legal counsel.”

I clerked with the Supreme Court when the justices granted review in the Gideon case. It was known within the court — and by knowledgeable outsiders — that the court was searching actively for the suitable vehicle to overrule Betts v. Brady, the obsolete 1942 Supreme Court 6-to-3 decision that had declared that the clause of the Sixth Amendment guaranteeing any felony defendant the assistance of counsel governed only federal criminal prosecutions and did not apply to the states. Earl Warren’s Supreme Court did not want to make this sweeping ruling — which all justices knew would be unanimous — in a case involving a horrid felony charge like murder or rape. Gideon’s handwritten petition was selected because he was charged and convicted of a seemingly innocuous felony: breaking and entering a pool room.

Fortas was appointed to prepare a brief and present oral argument in a slam-dunk case. The Supreme Court needed no convincing, and his argument — passionate or cerebral — was not decisive or even influential.

One can only hope that Dalin will view his extraordinarily interesting and informative short effort as an introductory step to an even more detailed study he can provide of the lives of the eight Jews who climbed to the top of America’s legal pyramid.

Nathan Lewin is a Washington attorney who has argued numerous cases before the Supreme Court.