“Jews and Ukrainians: A Millennium of Co-existence” by Paul Robert Magocsi and Yohanan Petrovsky-Shtern, Toronto: University of Toronto Press, 2017. 320 pages. $44.95.

The title — “Jews and Ukrainians,” and not something like “Ukrainian Jews and Ukrainian Christians” — tells us the book’s basic story. The Western concept of a Jewish American or a British Jew would have seemed beyond comprehension and even an abomination to both groups. For, as was the case in most of Eastern Europe until recent times, Jews in Ukraine and Ukrainians occupied the same geographical space but spiritually, socially and legally, they could have been on different planets.

Their social contacts outside of business transactions tended to be minimal, or nonexistent; they spoke different languages, ate different foods, prayed to what were, in effect, different Gods.

When it comes to Jews and Ukrainians, there are “stereotypes, perceptions and misperceptions” aplenty, note the authors of this book. Basically, Jews think of Ukrainians as anti-Semites “ready to attack Jews at a moment’s notice.” To Ukrainians, Jews are seen as “economic exploiters and, as the willing tools of foreign rulers, they always exploited the Ukrainian people.”

The authors, one a Jew who was born in Kyiv (the official spelling of Kiev) and the other a Protestant whose ancestors come from Ukraine, hope that the book will help replace “bias and prejudice” on both sides with “mutual understanding.” 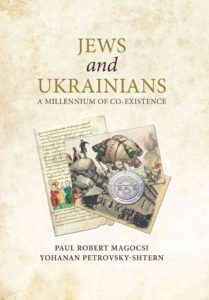 They have their work cut out for them, for there is an element of truth in both people’s perceptions. It’s hard to deny the strain of virulent anti-Semitism that has long plagued many Ukrainians.

On the other side, political rulers had long used literate Jews as property administrators and tax collectors vis-a-vis their Ukrainian subjects. And sometimes, the political leaders were not only not indigenous Ukrainians but, as in the case of Poland-Lithuania, which conquered the territory that formed modern Ukraine in the 16th century, were Catholics governing members of the Eastern Orthodox faith. As we Jews have come to learn, rulers of one faith governing those of another is often explosively toxic.

During that period, Jews were allowed to be money lenders, currency exchangers and tax collectors and were given freedom of religion, according to the authors. Polish magnates were given big swaths of land, and they invited Jews to settle in noble-owned towns in order to use their management skills to make the towns and their estates prosper.

Sure, the Jews were only trying to feed their families by doing work that was permitted to them. Often, they were not even allowed to reside in the territory without working for the monarch or the landowner. But, of course, the Ukrainian farmers only saw their misery, and the fact that the Jews worked for the people who were keeping them down.

Such situations inevitably lead to bad outcomes. As the authors note, most Ukrainian peasants view Jews “as a people of a different creed (Judaism), different economic status (functionaries of the magnates), different social entity (urban) and different language (Yiddish). They were therefore considered alien.”

Each author discusses his group’s relationship to religion, literature, theater, music and the arts, and the examples of interaction between Jews and Ukrainians in any of them are few.

There are a few exceptions. For example, in the chapter “Traditional Culture,” we learn that Jews and Ukrainians “shared beliefs and practices,” especially regarding the “netherworld.”

“Jews and Gentiles in Ukraine not only shared an interest in magic, they both sought the help of the same Jewish religious figure — the Kabbalist before the 1780s and after that time the Hasidic master (tsadik) — in an effort to ensure the well-being of themselves and their loved ones.”

But, as noted earlier, by and large, we’re dealing with separate universes.

After Ukraine became independent in 1991, its leaders tried to back away from the anti-Semitism and anti-Zionism of their former Soviet masters, the authors write. One major step they took was
Holocaust remembrance and improved relations with Israel.

And, in recent times, Jewish life in Ukraine has undergone a “remarkable cultural and religious revival,” they note.

Nonetheless, the age-old divisions persist between the two groups, and voices are heard that “essentially accuse the other side of being the cause of past calamities.”

The charges go something like this: “You, Ukrainians, facilitated the Holocaust, decimated the early modern Jewish communities, and organized the 1919 pogroms; you, Jews, [seen as leaders of the Soviet regime] locked up our churches, brought Bolshevik rule down on our heads, and facilitated the genocidal Great Famine [of the 1930s] … .”

I’m afraid that despite the efforts by the authors, those beliefs remain embedded in the national psyches of the two peoples. In the short run, attempts to purge them may be a political mission impossible.