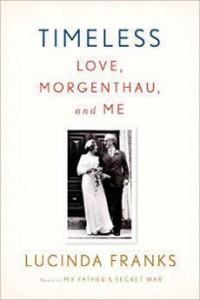 If opposites attract, it’s little wonder that recovering radical Lucinda Franks and respected and feared District Attorney Robert Morgenthau – poster children for May-December marriage – cling to each other as if welded.

They met in 1973, when she went to interview him for a news story. She was 26, a Christian Vassar grad, lively and talkative. He was 53, a gaunt, quiet Jewish widower, father of five – two still at home – and part of New York society.

He got her an interview at The New York Times, which hired her; began giving her news tips, and in 1976, asked her to a party at former John F. Kennedy adviser Arthur Schlesinger’s home. Love blossomed.

“Oh, how the odious matrons rebuked us,” she writes. “We are, after all, a marriage that wasn’t supposed to happen.”

Franks, who had poured pigs’ blood over draft-office files and chained herself to the White House fence, once was “a young woman in a state of rage. … I hated my country.” Moving to London, she was hired by United Press International. At 24, she became the youngest winner of a Pulitzer Prize.

Morgenthau, son of Franklin D. Roosevelt’s treasury secretary, was a World War II naval officer awarded two Bronze Stars for bravery and a former U.S. attorney whose 1974 election as New York County’s D.A. put in office a prosecutor whose reach and fame would become international. He supported helping the poor, pursued justice no matter the pressure and vigorously opposed the death penalty.

Franks calls Timeless a tribute to him, his 45 years of public service and their 36 years together.

I admit that my first reaction was “who cares,” but Franks is captivating. Timeless is like an extended conversation, hard to end and frequently providing insightful paragraphs and lovely sentences and turns of phrase, including: “The husband I know has the sweet cadence of an oboe, and the husband I don’t speaks with Old Testament fury.”

Years were needed for Franks to go from intruder to acceptance in a family where the first wife, who died of cancer, never was mentioned. When she pressed to learn more, Morgenthau replied: “She was a very private person, and she would want to stay that way.”

Morgenthau didn’t lack affection or warmth, but his emotional remoteness resembled that of Franks’ father, who had returned from secret wartime dangers withdrawn and troubled.

After each had a cancerous growth removed, their relationship sagged. A psychotherapist suggested that cancer fears activated Morgenthau’s repressed traumas. Franks got him to admit feeling depressed, and his emotional locks sprang open. She at last learned how he suffered seeing his sailors dead and dying after his destroyer was torpedoed and sunk, then seeing his father’s dementia and deterioration, then losing his wife.

Their closeness returned, and as they toured Israel, meeting with his friend Ariel Sharon at Sharon’s ranch, lobster-loving Morgenthau’s long support of Jewish causes became an intense devotion to Israel.

Among his prosecutorial triumphs was setting a precedent for recovery of Nazi-stolen property, seizing a painting loaned by Austria to the Museum of Modern Art.

It’s hardly surprising for a wife to speak adoringly of an accomplished husband, if seldom also so candidly. But are 376 text pages an enormous self-indulgence?

Yes, and I enjoyed every bit.