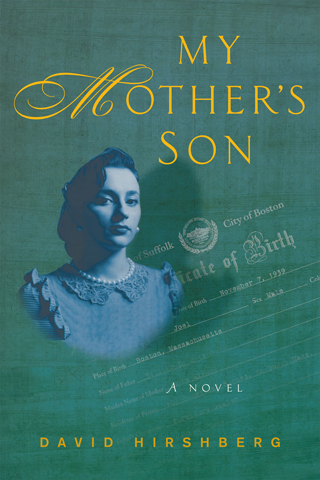 Ah, the ’50s. It was Eisenhower and Nixon; McCarthy, the villain (Joseph from Wisconsin, not Eugene, the 1968 hero, from Minnesota); the literate and witty Adlai Stevenson, who reportedly suffered from just a slight case of social anti-Semitism; look-alike houses in look-alike suburbs to which Jews and other Americans living in crowded cities fled; my hometown of Baltimore going big league (Colts, Orioles) in two successive years; the brand spanking new interstate highway system beckoning you to “see the USA in your Chevrolet, America is waiting for you to call”; Elvis and Ed Sullivan. It was a great time to be an American — if you were a White Anglo-Saxon Protestant.

Author David Hirshberg — a pseudonym for a businessman, who, we are told, wants to keep his literary and commercial lives separate — gives readers the opportunity to enter a literary time machine and return to this era in which Jews were finally beginning to feel at home in this country, at the same time that white America was experiencing unprecedented prosperity and optimism about its future.

Interspersed with the adventures of a Boston Jewish family in the 1950s, Hirshberg presents two conflicting — and equally compelling — stories of how a member of the family escaped from Nazi Germany and came to the United States.

The experiences of this family resonated with me almost from Page 1. But even if you’re not an old guy like me, “My Mother’s Son” will show how American Jewry coped with the challenges and prospered in an earlier — and vastly different — era.

The story is told by 13-year-old Joel and centers on his and his older brother Steven’s adventures. No moral beacon, no light unto the nations, this family. On the contrary, they seemed to fit in extremely well with Boston’s earthy political culture and society.

Joel and Steven participated in illegal gambling by delivering bets and winnings and helped a soldier go AWOL during the Korean War.

And, inadvertently, they contributed to the suicide of a beloved relative.

Among its other lessons, “My Mother’s Son” vividly demonstrates the cumulative effects of 65 years of steady inflation on the value of the dollar.

The boys are given 25 cents each a week — enough to completely satisfy their craving for sweets — to deliver bookie payments.

Then, they are asked if they would like to earn $5 each to help set up tables for a political meeting and clean up afterward. “‘Well, would I like to eat ice cream every meal, play baseball every day, get to kiss a girl once a week?’ I thought. Our faces lit up like Roman candles,” narrator Joel recalls.

But, in essence, this is a wonderful coming-of-age novel. Part of the book’s magic is the innocence of Joel and his brother.

When the Boston Braves decided to relocate to Milwaukee, people in Baltimore, who also thought their city would become home to the team, were disappointed. “There was a guy who’d made a scarecrow, dressed it in a suit, stuck a picture of Mr. Perini [the owner of the Braves] on its face, and hung the thing from a lamppost in effigy, which I guessed at the time was part of Baltimore like the North End was part of Boston.”

When a newspaper endorsed Congressman Kennedy in his run for the Senate, people were “saying that the fix was in,” writes Joel. “I Iooked at Steven, not knowing what was broken, but all he did was shrug his shoulders, letting me know that he hadn’t a clue, either, as to what this meant.”

The two boys were changing as they grew up. Joel noted that when they were younger, they believed everything they were told. But that was no longer the case.

“Cynicism is an acquired taste, no different from broccoli rabe or chenille or op art. … There does come a time, however, when it becomes too much for a kid to swallow everything whole … . It’s the moment you realize that you’re becoming an adult, for better or for worse.”

The teenagers were not only growing up but becoming sophisticated in their maturation —sometimes reaching a level of worldly wisdom that others never attain.

The boys’ Uncle Jake died under mysterious circumstances, and they asked their parents about it. During the conversation, Joel started to say something but for some reason held back.

“It was as if a future me were sending a warning to the kid me, signaling that it wasn’t always appropriate to say whatever was on my mind,” the narrator says.

“A subconscious flag was being waved in my direction, and the fact that it was perceived and properly translated was another indication that I was on my way to becoming an adult.”

Finally, Joel figured out that his uncle committed suicide.

Joel’s father tried to explain to him how the boys’ uncle suffered in Germany during the 1930s, but said that his brother-in-law wouldn’t talk about it. “For the first time in my life, I could detect sadness in a voice, a tonal quality that we can both generate and decode only as our brains wire up for adulthood,” Joel notes.

This book feels to me like a fictionalized autobiography. But even if I’m wrong and its pure make-believe, it’s a book with fascinating, warm, credible characters.