Walking into Adat Shalom Reconstructionist Congregation on Persimmon Tree Lane in Bethesda, it’s clear that this is no ordinary congregation.

From the outdoor Mishnah Garden created and maintained by congregants, to the rooftop solar panels and sanctuary draped in sail fabric with a solar-powered Ner Tamid, Adat Shalom’s dedication to spirituality and sustainability is evident from the start.

“Adat Shalom has taken care for creation [by God] very seriously, including in the design and construction of our synagogue,” said Rabbi Fred Scherlinder Dobb who has lead the 500 family congregation since 1997. “The congregation has become a green demonstration site for its low energy use, sustainable materials, solar energy installation, eco-educational activities, on-site organic garden and other Jewish-environmental innovations.”

What began in 1988 as a gathering of 100 people for High Holiday services quickly evolved into a desire for a full-fledged synagogue, explained Rabbi Sid Schwarz, Adat Shalom’s founding rabbi.

“Only after the [initial High Holiday] services did the group coalesce and decide that what they experienced was so joyful, so soulful and so fulfilling that they wanted to create a year-round congregation. The goal from the very start was to create a synagogue for ‘spiritual seekers,’ many of whom would never have joined a conventional American synagogue,” said Schwarz, who is also the founder of PANIM: The Institute for Jewish Leadership and Values.

One of those spiritual seekers was Vicki Stearn who, after moving to the area from New York nearly 25 years ago, made the decision to join the congregation after just one service.

“I didn’t shop around. I met people who were like me and had the same perspective as I did,” said Stearn. “The experience of being at Adat Shalom allows you to experience and approach the sacred through all of your senses. From intellectual pursuit or singing during services to the aromas of the food at our onegs and to the sight of the beautiful sanctuary, your whole body is infused with spirituality here.”

Leading the davening and much of the programming is Chazzan Rachel Hersh who has served the congregation, which will celebrate its 25th anniversary this coming May, since 1996.

Describing Adat Shalom as a very “spirited community that loves to sing and study text and is open-minded to new ideas,” Hersh explained that her favorite memories from serving as chazzan come from the services.

“When the congregation comes together and sings with one voice, it’s really incredible to me,” she said.

The Reconstructionist congregation also boasts an extremely vibrant and active religious school whose 180 students in pre-kindergarten through 10th grade meet on Shabbat mornings for classes and activities year-round.

“The school is a reflection of the values of the congregation,” said Chaya Silver, director of education and youth. “We define that as savoring and learning the richness of tradition and customs in combination with progressive thinking in terms of egalitarianism and the environment.”

“Adat Shalom has a remarkable way of connecting people with each other, with tradition and with the world, all at once,” concluded Dobb. “Ours is an intentional community, with many unique features: our rotating co-op system that offers a full vegetarian oneg luncheon to every attendee, every Shabbat; a dvar-Torah dialogue where the parsha gets processed by everyone; the first area EPA Energy Star Congregation designation (2002) and first solar panel installation on an area Jewish institution (2011); the first Reconstructionist shaliach from Israel (Erez Golan, an incredible educator now embedded in our community, and with Oseh Shalom as well); the single largest delegation to the movement’s stellar summer camp, Camp JRF; and much more.”

1987   Adat Shalom’s first service was for the High Holidays and more than 100 people attended.

1993   Moved to the Jewish Community Center of Greater Washington.

1995   Purchased 4.7 acre property in Bethesda where the congregational building was to be constructed.

2001   Celebrated dedication of new building with walking of Torah scrolls from Jewish Community Center of Greater Washington to new home in Bethesda.

2010   Created Mishnah Garden just outside of the synagogue.

Preaching to the choir 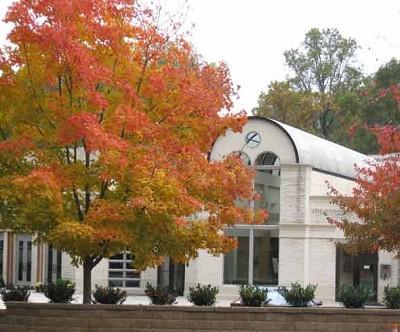