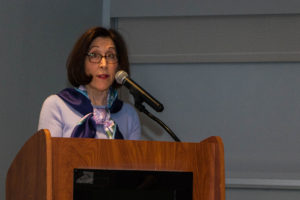 Liane Kupferberg Carter and her family know what it feels like to be singled out.

When she and her husband, Marc, attended the bar mitzvah of a neighbor’s child, the boy spoke about his community service at the Alternative League, a local sports league designed for children with developmental disabilities, in which the Carters’ son Mickey participated.

“For my mitzvah project, I’m proud of all the work I did for the Alternative League,” the boy said, according to Carter, the author of “Ketchup is my favorite vegetable: A family grows up with autism.” “I’m really good at sports, so I was able to share my skills with those kids. I hope I helped their poor lives in some way.”

Carter said she was mortified.

“It was so smug, so condescending,” she said.

That was years ago. But she recounted the story last month to a group of parents at the Jewish Community Center of Northern Virginia. Billed as a book talk, the event became a heartfelt discussion about parenting strategies for the attendees, many of whom have a child with a developmental disability.

“Ketchup is my favorite vegetable” recounts the Carters’ experience raising their two now-adult sons. Jonathan is the older child, and Mickey has autism and epilepsy.

Autism spectrum disorder is “a group of complex disorders of brain development. These disorders are characterized, in varying degrees, by difficulties in social interaction, verbal and nonverbal communication and repetitive behaviors,” according to Autism Speaks, a nonprofit organization that promotes awareness about autism.

Adam Samuels, of Springfield, started the discussion with a question Carter said she has never been asked: “If your first child had been on the autism spectrum, would you have still tried for another child?”

“I’d like to think that the answer would be yes,” Carter said. “I think the greatest thing you can give a child with a disability is a sibling as a role model.”

Gerri Sterling, of Fairfax, said she has twins, one of whom has a developmental disability. Carter’s son Mickey was often isolated while attending Jewish preschool due to his disability, but Sterling said having a twin has prevented social isolation for her son who has a disability.

Asked about the parents of the bar mitzvah boy whose remark upset her, Carter said she does not think the speech was malicious.

“I think it was ignorance,” she said, adding that other children in her neighborhood in Westchester County, N.Y., were earnest in their friendship with Mickey.

Another person at the book talk was empathetic to Carter’s struggles with her synagogue.

“I’m glad you shared the story about your synagogue because I thought that was really honest. It’s very difficult — honestly, the thought of taking my son to synagogue will bring on a panic attack,” the attendee said.

Samuels also asked Carter about meeting the needs of special-needs students in school. “There’s an issue of parity. We lived in a very wealthy school district,” Carter said, characterizing it as schools that aim “to get your child ready for Harvard. … Sometimes the special-needs kids were overlooked.”

Carter’s husband said that persistence is crucial to effecting any change.