After leading High Holiday services together for 30 years, Rabbi Avis Miller and Chazzan Larry Paul are eager to do it again. There are new stories to tell, tunes to sing and friends to catch up with. 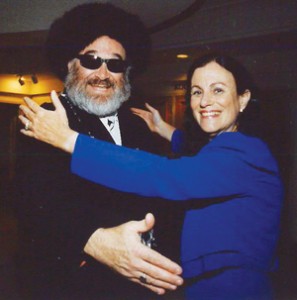 It all began in 1983 at Adas Israel Congregation in D.C. Miller was still in rabbinical school when she was asked to lead High Holiday services. Told she could pick her own cantor, she began asking around for suggestions. A friend recommended Paul, who she knew from a calligraphy class they were both taking at the Jewish Community Center of Greater Washington.

When asked, Paul said he replied, “Well I’ve never done that before, let’s try it.” He recalled “probably losing 20 pounds” before that first service. It’s one thing to know the prayers and songs, it’s a whole other matter to coordinate starting and stopping at the right time and dealing with the choir, Paul said.

But it obviously worked out, because the pair has been leading High Holiday services to a packed congregation ever since. They continued at Adas Israel until 2007 and then moved over to lead the traditional service at Sixth & I Historic Synagogue.

“We lead a terrific service at Sixth & I,” Paul said, clearly not trying to brag. “Neither of us needs to score big ego points or pat ourselves on the back,” he said, explaining one reason why they work so well together as a team.

They don’t practice together before the holidays. The first year, Miller gave Paul some tapes so he would know the tunes but that was the extent of their collaboration.

But somehow it all works out. “There are people who have been with us all 31 years,” Miller said. She knows of families who have grown up attending their service and keep coming since their children tell them they will come home from college for the holidays only if they attend their service.

When asked to what they attribute their longevity, Miller immediately pointed upward, denoting God. Paul answered, “I think we are both fairly relaxed, comfortable in our roles.”

“At least on the bima,” Miller chimed in.

“We are a people of oral tradition, stories and songs, and so Avis handles the storytelling, and I handle the songs,” Paul said. Rather than recite readings in the prayer book, which people can do on their own, Miller said she tells “stories. They could be chasidic, relevant jokes or something interesting she saw in The New York Times.”

Their service is participatory. Clearly both Miller and Paul, who runs a financial planning business the rest of the year, would not be happy with a room filled with congregants who merely sat still and listened.

“There is an energy in the room,” Miller said proudly. There is no longer a choir. Instead, the whole congregation is the choir, they both pointed out.

“They know the service, it’s comfortable,” Paul chimed in, adding, “I start the tune, and they jump in.”

That also describes the relationship between Paul, of Bethesda, and Miller, of Chevy Chase. Like a married couple, they finish each other’s thoughts and simultaneously smile when recalling previous services.

One such memory happened at Adas Israel, when a Pepco transformer blew on a very hot day, leaving the pair with “no air conditioning, no lights, no P.A. system,” Paul recalled. “I had a bullhorn,” said Miller.

When they first started, they led services in the basement, where candy wrappers covered the floor and plastic plants were the only decoration, Miller recalled.

They conduct services in the main sanctuary at Sixth & I. Not only do they fill the entire room, but those quick enough to obtain tickets sometimes have to wait for those who arrived early to then leave early before getting a seat.

Esther Safran Foer, executive director and CEO at Sixth & I, said tickets for Miller and Paul’s services “go first.” This year, tickets were gone in 48 hours, which was “at least 20 to 25 percent faster than the previous year.”

Tickets go quickly for all services at the historic synagogue, she noted, adding, “I have to say all of our services are incredibly popular. There is an amazing turnout, and part of that is the quality of the leaders.”

About 3,000 people attend High Holiday services at Sixth & I, Foer said. She has even seen requests for tickets posted on Craigslist.

“It’s very encouraging about our future.”

As for their future, Miller and Paul hope to be on the bima for many High Holidays to come. Paul said their quitting will “be like when you give up the keys to the car.”