“Sometimes you arrive at your destiny in an indirect way,” Irene Pollin, 92, writes in her newly, self-published autobiography, “Irene and Abe: An unexpected life.”

Abe Pollin is Irene’s late husband, a real estate developer and owner of the Washington Wizards and Capitals sports teams. Abe Pollin died in 2009 and Irene’s son, Robert, suggested she write the book as a way to “reflect on her life.”

Her destiny was to devote more than a decade of her life to promoting women’s heart health and to donate millions of dollars to medical programs around the world.

The indirect path she took was through dealing with the early deaths of two of the couple’s children to congenital heart defects. Kenneth lived 15 months and died in 1953; Linda died in 1963 at age 16.

“There are times in your life when you just keep going, and [Kenneth’s] death was one of them. … I lived with a pain in my chest for a long time,” Pollin writes.

“Most people don’t have that opportunity to look at their lives like that,” she said in an interview at her Bethesda home.

With the deaths of Linda and Kenneth in mind, Pollin founded the Sister to Sister: The Women’s Heart Health Foundation in 1999. The foundation closed in 2014, but her philanthropy has created heart health programs across the United States, and is transforming medical care among minority communities in Israel.

Pollin’s desire to promote heart health was sparked in the 1990s during a business meeting she and Abe Pollin had with future Washington Redskins owner Dan Snyder, who owned a company that sold advertisements placed on boards inside buildings.  Snyder invited Irene Pollin to work on a women’s heart health awareness campaign, funded by CVS and Pfizer.

When she learned the majority of heart disease is preventable, she couldn’t say no.

“With two children born with severe congenital heart defects in which there was no way to avoid the outcome, I felt so strongly about having an option,” Pollin writes. “If you’re lucky enough to be born with a healthy heart, you should take care of it.”

Today, Pollin’s work continues through the institutions she’s endowed with research programs and professorships, which include Johns Hopkins University, Brigham and Women’s Hospital of Harvard University and the Barbra Streisand Women’s Heart Center at Cedars-Sinai Heart Institute in Los Angeles.

Heart disease has been, and still is, the number one killer of women — about 400,000 each year in the United States —a statistic that surprised Pollin when she first heard it. National surveys in the 1990s showed that only 10 percent of women were aware of this. Today, that figure has risen to between 47 and 53 percent, according to Noel Bairey Merz, who directs the Linda Joy Pollin Women’s Heart Health Program at Cedars-Sinai Heart Institute in Los Angeles.

“Unlike cancer, [heart disease] is not that mysterious, and some of it is under our control,” Merz said, adding that people sometimes “have their head in the sand” when physicians warn them about high blood pressure or high cholesterol, “and that isn’t very productive thinking.”

Merz praised Pollin for her willingness to butt heads with the American Heart Association, which saw Pollin as intruding on its space, Merz said.

She’s willing “to take on organizations and chastise them when they aren’t doing what they should,” Merz said of Pollin.

Pollin is forward with whomever, and whatever subject, she addresses. But she softened during an interview when she discussed her dead children.

“It’s a tough a thing to talk about,” she said.

Both of her parents died from heart attacks, and in the same year as her daughter. Pollin called it “a terrible year of tragedies.”

Pollin also donated $10 million to Hadassah University Medical Center in Jerusalem to create a cardiovascular wellness center for women, also named after her daughter, which is directed by cardiologist Donna Zfat-Zwas.

The center targets haredi Orthodox Jews and Israeli Arabs, two of Israel’s most vulnerable communities.
Zfat-Zwas said she reaches haredi women by going through the schools. (Haredi women commonly take jobs as teachers.) The program works on the idea of “upstream changes.”

“You can do tremendous preventive work with 18- and 19-year-olds who will be mothers in a year,” she said in a phone interview from Israel. “In 20 to 30 years, she’s going to be healthier and her family will be healthier.”
Zfat-Zwas takes a similar approach with Arab-Israeli women who, for cultural reasons, are not always able to seek out medical assistance on their own.

“They are a disempowered population. Even though they have the information, they are unable to [understand it] to take charge of” their health, she said. The programming being done by Hadassah “lets them take control of their own health and their family’s health.”

Merz describes Pollin as an innovator in her work of heart health advocacy.

Said Merz, “She went where no one else was going by recognizing this massive problem.” 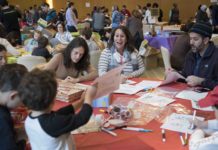 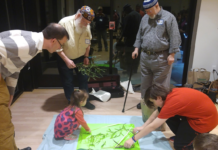