U.S. Secretary of State John Kerry took a beating back in October when, at a State Department reception celebrating the Muslim holiday Eid al-Adha, he apparently blamed Israel for boosting the
Islamic State’s recruiting efforts.

“As I went around and met with people in the course of our discussions about the ISIL coalition,” said Kerry at the time, “there wasn’t a leader I met with in the
region who didn’t raise with me spontaneously the need to try to get peace
between Israel and the Palestinians, because it was a cause of recruitment and of street anger and agitation that they felt – and I see a lot of heads nodding – they had to respond to.”

Israeli officials, led by Minister of the Economy Naftali Bennett, pounced: “It turns out that even when a British Muslim beheads a British Christian,” said Bennett, referring to the Islamic State fighter with a British accent who murdered British aid worker Alan Henning, “there will always be those who blame the Jews.”

According to “American Public Attitudes Toward the Israeli-Palestinian Conflict,” a new study sponsored by the Sadat Chair for Peace and Development at the University of Maryland, however, Kerry’s view reflects those of most Americans. In the survey, which was released Friday at a live event at the Brookings Institution, 64 percent of Americans say the Palestinian-Israeli conflict will likely increase support for the Islamic State; 30 percent believe events in Israel make no difference to the terrorist group’s recruiting efforts.

The nationwide survey, led by University of Maryland scholar Shibley Telhami, was conducted Nov.14-19 with a sample of 1,008 American adults. It contained a margin of error of about 3.4 percent. 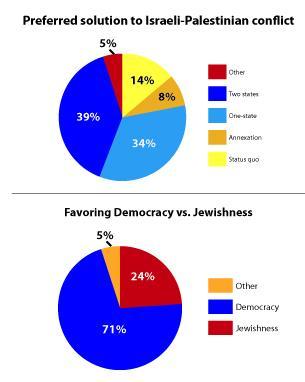 Despite American public opposition to expanding settlements, most do not support imposing sanctions or doing something harsher than making statements. Overall, 61 percent say do nothing or limit opposition to statements, while 39 percent support imposing sanctions or other measures.
At the question-and-answer session following the survey’s release, Telhami said he was personally surprised by the high number of Americans who said they supported sanctions against Israel for continued settlement construction. He conceded that he had no past data with which to compare these results.

Ori Nir, director of communications and public engagement for Americans for Peace Now, who attended the Brookings event, seized upon the survey data as supporting his group’s critique of Israeli policy.

“I see this finding as an indication of the success of what has been APN’s message for many years,” Nir said in an interview. “Americans, almost universally, are pro-Israel. If 40 percent of them are willing to impose sanctions on an ally with whom they feel a strong affinity because of very specific policies that they find offensive, that to me is a strong indication that they make a clear distinction between Israel and the settlements … which undermine its future as a democracy and a respectable member of the family of nations.”

Omri Ceren, managing director of press and strategy at The Israel Project, countered that the big picture remains the same.

“People will differ on the specifics, but when you ask them whether the United States should lean toward Israel over the Palestinians, the answer is as always overwhelming. By enormous margins, Americans want their policy makers to support Israel.”

“Given this poll’s margin of error, it’s entirely possible that American support for the Palestinians is less than 1 percent.”

Sparks flew this past weekend at the 11th-annual Saban Forum when
the Brookings Institution’s Martin Indyk and Israel’s Minister of the Economy Naftali Bennett met together onstage for an on-the-record discussion and debate.

The heated exchange was focused on Bennett’s rejection of Palestinian statehood. Indyk and Bennett each called the other deluded.

“How many people need to die in our country until you wake up from this illusion?” Bennett asked Indyk.

Indyk countered: “You know, I just think you live in another reality.  It’s what Steve Jobs called distorted reality thinking.”

To which Bennett replied: “You know, I love that sentence. I live in another reality. I’ve been in the First Intifada, the Second Intifada.”

Bennett also criticized what he sees as an American tendency to see every problem as having a solution. “You know, you can have an imperfect marriage,” he said. “You need to work on it, improve, not everything is clear-cut Western solvable.”

Indyk also pressed Bennett on past comments in which the Israeli said John Kerry, the U.S. secretary of state, encouraged terrorism and “amplified” anti-Semitism. Apparently chastened, Bennett said there were things he regretted saying and added that Kerry was a friend of Israel.