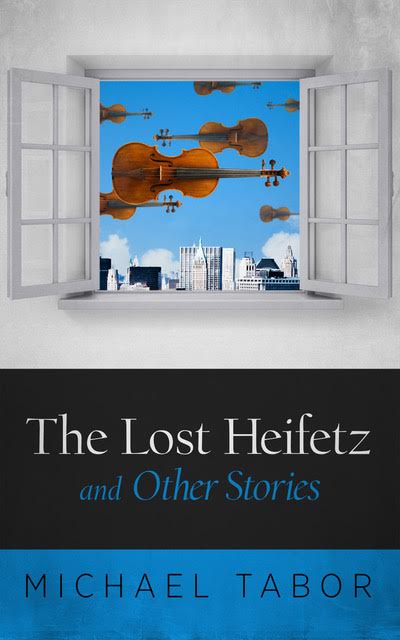 Max Berg may have been the new Jascha Heifetz, thought to be the finest violist of all time. He was feted and adored in Vienna in the mid 1930s, his concerts sold out, the critics spellbound by his exquisite music.

Then, the Nazis came to power. To survive, the Polish Jew was forced to prostitute and hide his talent. The Nazis failed to kill Berg but they destroyed his life, his desire to play the violin.

However, in New York, Berg, calling himself Goldberg, met a musician and music lover who helped him to regain his dignity.

That’s the theme of “The Lost Heifetz,” the first short story in this remarkable collection from which it takes its name.

This is author Michael Tabor’s first book, and he seems destined for success. He is a marvelous storyteller, his narratives beautiful in their clarity and conciseness. And his ample imagination sometimes edges toward off-the-wall bizarre.

But it is the variety of his life experiences — he grew up and studied in England, before teaching at Columbia University in New York and the University of Arizona — which provide both the atmosphere and spice for these stories.

In “The Show Never Stops,” Tabor transports us to a London theater, where we get perspectives from a critic, his date, the theater bartender, an ice cream seller, the leading lady, an usher, the director and — more unusually — from the bar mirror, the stage and the “gents” (men’s toilet).

“The neon sign flashed on and off with a seductive wink that beckoned me in. I was short of cash, behind on deadlines, and late in love.”

The pawnbroker has shelves of plots and narrative voices. “What does he do with plots that he can’t resell?” asks the writer.

He sends it to a recycling company that sells “refurbished ideas” to a publisher. The publisher puts them online and sells them to customers who use its story-writing program.

According to Tabor, Oscar Wilde got it wrong when he wrote “The Portrait of Dorian Gray.” The story goes that Gray remained young and handsome while his portrait, locked in a room in his house, showed the ravages of time and debauchery on the man, until Gray stabbed the portrait and died.

Lucifer’s work? “But, of course,” the author notes, “there are no such things as pacts with the Devil; the Devil resides only in the hearts of evil men. And no painting changes of its own accord other than to fade with time.”

So, in “What Really Happened to Dorian Gray,” Sybil Vane, the beautiful actress who supposedly killed herself over Gray, tells the real story.

As I noted, Tabor’s imagination is simply off the charts.

One of my favorites is “Measure for Measure,” the last in the collection, in which an honest academic tries to fight the system, but may have been corrupted by the rewards it offers in exchange for his silence.

According to the cover blurb, Tabor quit his position as professor of applied mathematics at the University of Arizona to become a fiction writer. I don’t know how that worked out in dollar terms. But whatever the financial outcome, and even if Tabor was an outstanding mathematician, he has found his calling as a writer of fiction.

This is the best collection of short stories I have read in a long time — maybe the best ever.

If you enjoy short stories, get this book.