Dear Aharon Friedman, It has been approximately five years since you separated from your then wife, Tamar Epstein, and three years have passed since your civil divorce was granted. And yet, although you profess yourself to be a religious Jew, you have refused to grant Tamar her get, her religious divorce that would allow her to remarry according to the dictates of Jewish law and tradition.

So, on July 11, several dozen of your neighbors, including local rabbis, high school and college students, government workers on their lunch breaks, and other concerned community members came to rally outside your office at the Longworth House Office building where you work for Rep. Dave Camp (R-Mich.), chairman of the U.S. House of Representatives’ Ways and Means Committee. By day, you work on Capitol Hill on important legislation regulating taxes, trade or Social Security. You speak to important people, and impact the lives of many citizens.

At home, you are persona non grata in your community, unwelcome at any neighborhood synagogue, not invited to friends’ houses for a Shabbat meal, excluded from taking your young daughter to play with other children and their parents. You severely impact the life of one woman, Tamar Epstein, preventing her from going on a date, from marrying, from moving on with her life. She is waiting, stuck and, although you may not admit it to yourself, so are you.

So, we stood outside of your office, chanting slogans such as “Aharon Friedman, stop the abuse; Aharon Friedman, free Tamar now.” We chanted, shouted and even prayed. Did you hear? Your colleagues did. As we stood, sweating in the heat, chanting angrily, numerous faces popped out of their office windows, staring at your picture on our signs, regarding protesters who came down to Washington, D.C., not because of crises in Syria, Egypt, or Iran, not because of world hunger or nuclear stockpiling, but because of the actions of one person — you. The public heard, too. Countless passersby in town to lobby, work or tour, picked up fliers detailing your stubborn, spiteful treatment of Tamar, asked us for more information, shouted to us words of encouragement and good luck.

Mr. Friedman — is this how you want to be known? As a man whose community is angry enough to send 50 or so representatives to protest his actions at work? Do you really want people to Google your name and find information not about your professional profile, not about your political accomplishments, but instead about your personal life and your community’s contempt for you?

Mr. Friedman, it is never easy to change, to break a pattern you have been stuck in for months and years. But at this point on the Jewish calendar, as we finish the season of mourning the destruction of the Temple, which was caused by the spread of baseless hatred, and as we begin the season of preparation for Rosh Hashanah and Yom Kippur, the High Holy days of repentance, as we all take the opportunity to reflect on and change our personal and national failings, will you take the opportunity to break the destructive, fruitless pattern you have become stuck in?

It is never too late to change, and there is no better time to give Tamar her get than now. Until then, unfortunately, we will continue rallying, pressuring and protesting. We will not give up until Tamar is free from this terrible, chaining, waiting game.

Atara Siegel from Silver Spring is a member of Yeshiva University’s Agunah Advocacy club. Her email address is [email protected] 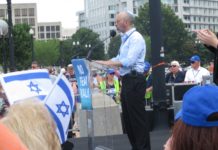 I helped organize the rally against antisemitism. It wasn’t perfect, but it was necessary.

Enough with the ‘ex-Orthodox’ drama. Those who leave can learn to separate dysfunction from Judaism.