How many Tevyes are enough? There were Zero Mostel and Herschel Bernardi in the 1960s. Chaim Topol was the Israeli Tevye. Theodore Bikel was the Theo Tevye.

If you haven’t yet had enough of this tradition, which holds the hamlet of Anatevka together like playgoers and Fiddler on the Roof, how about girl Tevye?

That would be Josie Stein, the 14-year-old who plays the lead in Fiddler on the Roof Jr., a production of Kensington Arts Theater’s 2nd Stage, running March 5-20 at the Kentlands Arts Barn in Gaithersburg.

“The point going into this was not to act like a man, but my vision of Tevye,” the eighth grader says during rehearsal last week. She has a beard glued on with spirit gum, her long hair hidden under a cap.

Josie is basing her gruff but ultimately humane character on her father. “He’s a big softie inside, but he still cares about the way things should be done.”

Fiddler Jr. is a production by kids for kids, says director Fred Zirm, a 39-year veteran of middle-and-upper school productions at the Landon School in Bethesda.

Thirty-four kids responded to a casting call late last year — “We got our Golde through a flier in the Rockville library,” Zirm says — and 24 of them made the cut. They range in age from 8 to 17, but most are fifth-to-eighth graders.

This is Zirm’s fifth Fiddler. He’s done the full version twice with high school actors. Fiddler Jr. contains the full helping of schmaltz, but is less demanding on the young players; it can be performed in an hour.

“It’s compressed,” Zirm says. “It cuts out a song or two. And the songs are shorter. In ‘Rich Man,’ Tevye doesn’t get to feed all the chickens. You still get the idea: He’s not a rich man. He wants to be. And he’s mad about it.”

And Fiddler, which has become part of our cultural DNA, gets its point across without lavish treatment and a cast not old enough to grow the luxuriant beards of Eastern European Jewry.

“I think Fiddler — even Junior — is a happy-sad play about prejudice and tradition and change,” Zirm says.

The kids get it, too. “We do a Wikipedia version, talking about the background” — of Jewish life in Russia and the pogroms and prejudice that sent Jews out of the country by the millions at the turn of the 20th century, Zirm says.

As Josie explains, “It’s 1903. They’ve been living this life for centuries. Tradition is fading in the village. War is happening.”

For about one-third of the cast, that history is their family history.

Eleven-year-old Ella Kotok says she’s “watched Fiddler on the Roof multiple times with my grandfather.” Cast as Yente the matchmaker, Ella says it takes a sense of humor to play the part. “It was easy to get her because she’s like a lot of my family members.”

Likewise, Haden Polsky, 11, brings some knowledge of Fiddler to his role as Motel the tailor.

“He’s this really wimpy person. He doesn’t know how to stand up for himself,” Haden says. “He’s a lousy tailor.”

Haden enjoys the comic bits of gingerly trying to approach the volcanic Tevye to speak to him.

“He helps Tevye realize that the world is changing and people are going to choose things for themselves.”

On this night, the cast is running through songs including “Matchmaker” and “Tradition.”

“What are the things to remember about ‘Tradition’?” Zirm asks before they begin.

The steps. Not to smile. Strong entrances. Sing loud.

Many cast members have acted before. Ellie Helgeson, 13, says this is her first time in a play and her first encounter with Fiddler. She doesn’t have a name in Anatevka. “I’m a villager and part of the ensemble,” she says. “I do some dancing.”

For this Anatevka’s Tevye, Fiddler still has something to say.

“It’s an epic story,” Josie says. “Even though it’s about Eastern European Jews, anyone can relate to it.”
And it proves that in America anyone can grow up to be Tevye. It’s tradition, no? 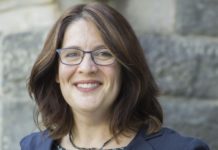