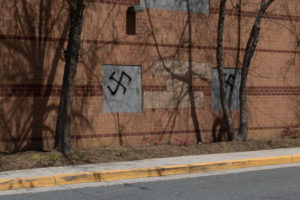 The 20-year-old Annandale man who was arrested and charged for spray-painting anti-Semitic graffiti on the Jewish Community Center of Northern Virginia and a nearby church appears to be connected with a Twitter account called “Aryan Underground.”

The photo was tweeted on March 20, the same day police say Mahone distributed the flyers.

The account also posted several photos of similar flyers appearing on college campuses in California, as well as links to the photos of the graffiti defacing Little River United Church of Christ, in Fairfax.

Detectives positively identified Mahone using video surveillance at the church, JCC and college, police said. Police said Mahone is the only suspect in the case, the Washington Post reported.

Mahone is being charged by both police departments with four counts of felony destruction of property, one count of placing a swastika on religious property with intent to intimidate, two counts of wearing a mask in public to conceal one’s identity and one count of posting hateful posters on the college’s campus.

Mahone was arrested at his home on the 3500 block of King Arthur Road in Annandale on April 12 at 9 p.m. without incident, according to Parker.

Police also say Mahone is responsible for similar graffiti at the Little River United Church of Christ in the 8400 block of Little River Turnpike.

The church’s banners and signs were defaced with anti-Muslim rhetoric, swastikas, anti-LGBT slurs and messages such as “Defend America” and “Hitler was right,” according to the Rev. David Lindsey.

“We condemn what happened this past week but we must also acknowledge that for most of the past 400 years white supremacy has been the norm here in Fairfax County,” Lindsey said at an April 13 news conference announcing Mahone’s arrest. “The events of this week have sadly proven that even now some of our neighbors are not with us.”

Lindsey and the JCCNV’s executive director, Jeff Dannick, thanked the Fairfax Police for its work during what Dannick described as a “dark few days.”

“The fact that [this] happened on Passover is particularly hurtful to our community,” Dannick said at the press conference. “But in order for there to be light, there has to be darkness first. So what I am looking at is the light.”

Northern Virginia Community College spokesperson Kathy Thompson said Mahone has taken classes at the college, but is not currently enrolled.