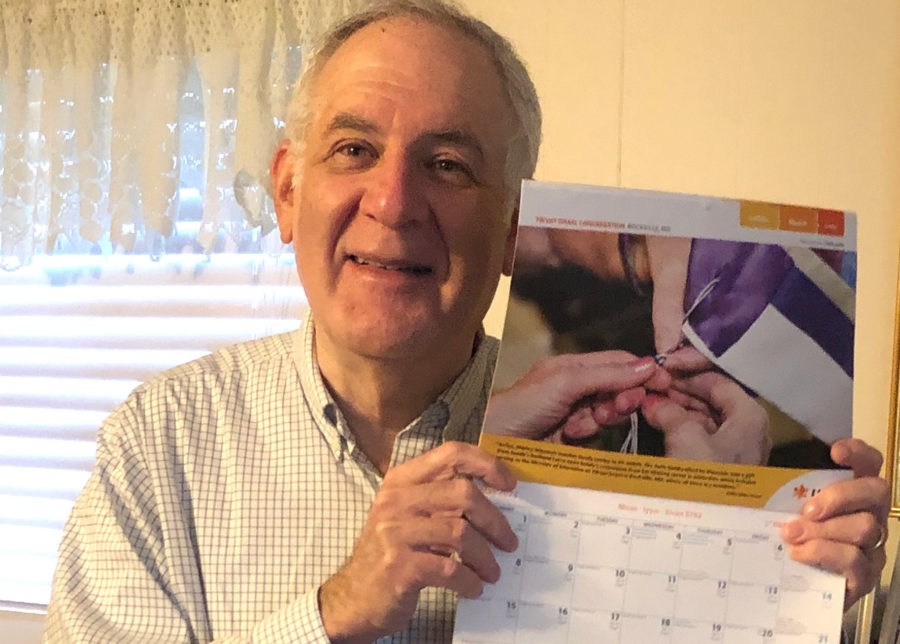 Any day now, Larry Levine expects the calls to start coming. The texts. The congratulations from other members at Tikvat Israel Congregation. As soon as they flip their Conservative movement calendar from April to May, they’ll see it: Levine’s photo of two pairs of women’s hands tying the knot of a tzitzit.

“A lot of people are going to see it shortly,” says Levine, a professional photographer, whose work was one of 15 shots from synagogues around the country chosen to illustrate the calendar.

The two sets of hands in Levine’s photo belong to his wife, Sandy, and to fabric artist Shirley Waxman. Sandy Levine had just retired in June 2019 from a career in education and Larry asked Waxman to create a tallit to mark the milestone.

When they went to pick up the tallit from Waxman, who is also a Tikvat Israel member, “It was one of those things that I thought, ‘I want to bring my camera along.”

As he watched Waxman teaching Sandy how to tie the knots attached to the tallit, he sought a moment that would tell a story.

In December 2020, Levine got a call from his rabbi, Marc Israel, asking if he had any photos that the United Synagogue of Conservative Judaism could consider using in a calendar debuting the next fall.

“I thought the pandemic would be over by that time and people wouldn’t want to see pictures of people with masks on,” Levine says.

In Beth Knobler’s photo of religious school kids meeting for class in Congregation B’nai Tzedek’s parking lot — the calendar’s photo for February — the point was to see them in masks. And social distancing. And all the other ways the school came up with to keep running safely during the worst days of the pandemic.

“I have a degree in visual media/photography,” says Knobler, the religious school’s administrative coordinator. “So the synagogue occasionally says, ‘Hey, we need some pictures.’”

Knobler’s photo shows the students’ chairs circled by hula hoops. A gap yawns between people in the near and middle distance. Safe distances had been measured precisely. Classes were dependent on it not raining, or getting dark or too cold. There were temperature checks and forms to fill out before anyone even stepped out of the car.

The photograph, which also appeared in Washington Jewish Week, is “a snapshot of what our students and teachers were experiencing,” Knobler says.

Levine says he enjoys having his work seen. “If I have strong feelings about something, it leads to a strong picture — or it leads me to something else.”

Knobler says the scene she photographed already looks a little remote. A time of temperature taking and holding class under darkening skies.

The kids are going “to recognize it, but they’re also going to remember how fun it was.”