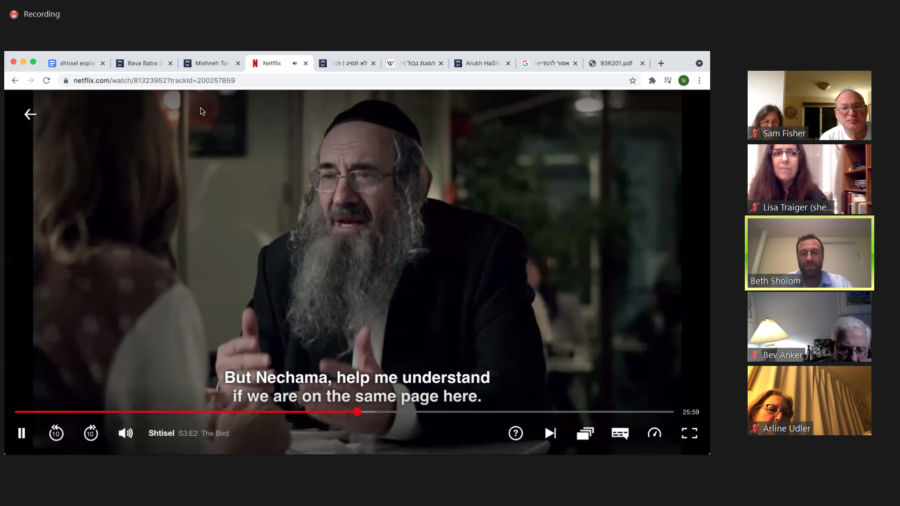 Can’t get enough of “Shtisel,” even after binge-watching the long-awaited third season on Netflix? At Beth Sholom Congregation and Talmud Torah in Potomac, the Israeli dramedy about a haredi Orthodox clan and their surprisingly relatable problems has become part of the Orthodox synagogue’s Torah study.

During each class, Antine plays clips from the show and then shares proof texts he selected.

In a recent class, Antine focused on the many lies the Shtisels tell. “No community condones lying,” Antine said. Yet much of season three concerns the lies family members tell one another.

Antine said that because of the many strictures the Shtisels’ community follows, shame plays a huge role in how the characters operate and why they lie or, perhaps, modify the truth to save face. When Giti learned that her friend, whose husband abandoned her, thinks that Giti and husband Lippe went through a similar crisis, Giti immediately shot down the assumption, even though she believed Lippe had an affair.

Lying, Antine concluded, is permissible according to the Talmud if the lie does not cause damage to another person. And if the lie is for the sake of peace, it is obligated.

“As rabbi, my job is to teach Torah, teach Jewish law, aspects of Jewish literature, liturgy and philosophy,” Antine said. “And sometimes you need a hook. At the most basic level I’m using the show as a hook. If I wanted to teach one day about the kollel [yeshivah] system and the value of Torah study, I wouldn’t get many people. But if I do it in connection with ‘Shtisel’” — he’s had up to 60 people show up.

Antine started “Shtisel Explained” two years ago, after he found himself fielding questions congregants about the distinctive practices depicted in the popular show. So he created “Shtisel Explained,” a course to delve into the intricacies of halachah – Jewish religious law – and the customs. Carried on Zoom, the class has attracted interested “Shtisel” viewers from around the world, including from Canada, Israel and Australia, he said.

Antine prepares by re-watching episodes, homing in on themes that are relevant to his congregants and selecting appropriate texts and commentary to illuminate the issue.

Thanks to “Shtisel,” the class has covered the range of “What does Judaism say about?” topics — infertility, fair or unfair business competition, cousins marrying, when and how a married woman covers her hair, and why unmarried adults of the opposite sex leave a door partially open when they’re alone.

Congregant Bashi Packer is hooked, both on “Shtisel” and on Antine’s classes. She takes a daf yomi (page a day) Talmud class with the rabbi every morning, but finds “Shtisel Explained” entirely different.

“[Daf yomi] is like ancient history. ‘Shtisel’ is modern life, even though their modern lives don’t look so much like the lives of many of the people who watch. It’s a good opportunity to combine learning halachah with popular culture.”

Beth Sholom member Brooke Charapp noted how much she learned that was personally relevant. “Someone can teach this class and say, ‘Here’s the rules, the halachah, the information.’ While the examples he uses are from ‘Shtisel,’ he really gets into the meat of Judaism.”

A reluctant Shtisel-ite at first, Brooke’s husband, Jamey, is a regular in Antine’s classes.

“I grew up non-religious, so when I watched it I was pretty hooked. I love to learn more about my own religion. It has an impact on me to see these different practices. Then Rabbi Antine breaks it down, so when I ask, ‘Why did they do that?’ He’s like the Cliffs Notes,” Jamey Charapp said, adding,

“His classes took the mystique out [and] made [haredi Orthodoxy] feel less intimidating and made me understand what I was watching. It made me feel much closer. A Jew’s a Jew.”

Antine said “Shtisel Explained” has reconnected him to topics he hasn’t studied recently. “Every time I look into a topic,” he said, “that allows me to go into a deeper level than I had before.”

As for what’s next, a few congregants have expressed interest in a class on another Netflix program: the equally closed and halachic-bound world of “Unorthodox.” At the moment, Antine is thinking about it.