Bobbi and Larry Gorban are proud to announce the birth of two grandsons. Isaac Shai Raphael Sandler, son of Elana Premack Sandler and Josh Sandler was born on Dec. 29, 2012, in Boston. He is named after his grandfather Joel Samuel Premack and great-grandmother Rose Harris Blonder. Austin Harris Premack, son of Ben and Heather Premack, was born March 20, in Philadelphia. His Hebrew name is Levi Tamid. He is named after his great-uncle Larry Blonder and great-grandfather Thomas Gorban. 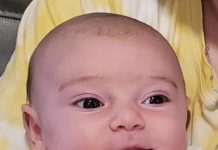